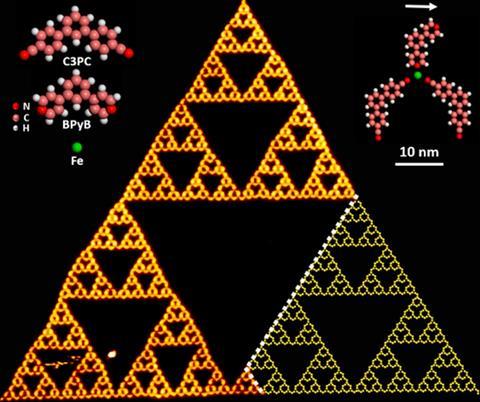 Chemists have grown the largest fractal triangle so far using iron atoms and small organic linkers. As a level five fractal, the structure beats the previous record holder by one level.

Now scientists from China, Poland and France have grown a Sierpinski triangle with five division levels. The whole structure is only 50nm in length, comprising 495 iron atoms and 754 linker molecules.

Although the researchers used scanning tunnelling microscopy to investigate the structure, they did not use it to create the fractal triangle. Rather, the structure self-assembles, meaning the individual components – iron, 4,4″-dicyano-1,1′:3′,1″-terphenyl (C3PC) and 1,3-bis(4-pyridyl)benzene (BPyB) – spontaneously arrange into fractal triangles when deposited on a gold surface.

First, the iron atoms guide the formation of C3PC triangle chains. But as BPyB starts to join the assembly, the chains become unstable and collapse into fractal triangles. However, this only works if the ratio of C3PC to BPyB is exactly 3:1, the chemists found.

They now hope that this co-assembly strategy will lead to even larger fractals.