Tests show that cheap, scalable battery should still have 85% of its storage capacity a decade later 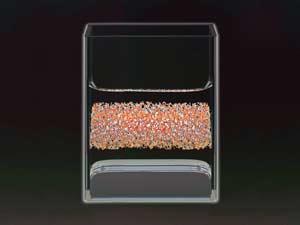 Storing electricity from intermittent, but renewable, sources such as wind and solar power and even from more conventional power stations, could allow national electrical grids to meet demand more consistently. Now, US researchers at the Massachusetts Institute of Technology have developed a liquid metal battery that could fulfil that role. Such a battery would lower the overall costs of energy storage, and have the advantages that they are mechanically simple and don’t take up much space.

Donald Sadoway and colleagues devised a stationary energy storage solution based on a liquid lithium negative electrode, a molten salt electrolyte and a liquid antimony–lead alloy for the positive electrode. The materials are immiscible and so form the necessary three separate layers by self-segregation. This makes the device relatively easy to fabricate and precludes the need for sophisticated and costly precious metal membrane technology and separators. The team also points out that the liquid metal battery has a longer recharge cycle life and a higher current density than other experimental systems that do use such membranes.

Indeed, the team’s experiments with this novel storage system carried out at 450°C displayed a current density of 275mA/cm2, with a cycling efficiency of 98% on charging and 73% ‘round-trip’ energy efficiency. While the operating temperature is high, and thus requires a proportion of the energy supply to keep the metals liquid, the use of lead rather than the much higher melting magnesium used in earlier prototypes brings the operating temperature down from 700°C.

Sadoway explains that there need be no concerns regarding the use of lead in such a system. ‘Lead is not a problem as it is inside a sealed container,’ he says. ‘It’s not going to be venting or leaking into the environment. Safety is not an issue in the course of normal use. In fact, if the battery case were breached and the contents leaked, they would freeze. In this sense, a battery that is operative only at elevated temperature is safer than a battery that is operative at ambient temperature.’

Critically, for the adoption of such liquid metal systems in energy storage is the capacity loss over time of such systems. The team’s experiments completely charging and discharging their battery over 450 cycles over 75 days suggests that the battery will still have 85% of its initial storage capacity after 10 years active service. The long life of the system is partly due to the nature of the battery in that there are no sensitive, solid, mechanical components to be contaminated and degraded during use as there are with conventional rechargeable lithium batteries such as those used in portable gadgets like mobile phones and laptop computers. The team adds that at today’s prices, the electrode materials costs are approximately $65/kWh (£40/kWh).

‘The invention of this three-level liquid metal battery is unique,’ says Stanford University’s Robert Huggins. ‘It is leading to the development of an entirely different type of energy storage device for large-scale applications, in which size, weight and portability are not critical parameters. Instead, cost, high rate performance, safety and lifetime are most important.’