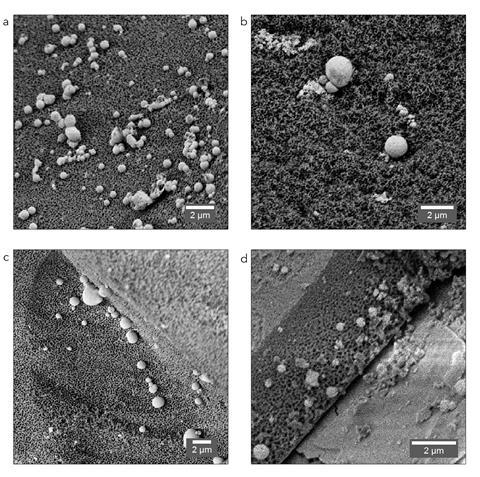 Researchers have unveiled a catalyst made of liquid gallium adsorbed onto a solid substrate, and shown it to be highly effective in an industrially vital reaction. Although practical issues remain, the team believes catalysts of this type could be active in many other reactions and potentially very useful in industry.

Supported liquid phase catalysts, which involve a liquid adsorbed onto a solid substrate, were pioneered in the 1980s using metal complexes in organic solvents and later extended to include ionic liquids. One advantage they offer is resistance to ‘coking’ – where high-carbon compounds build up around and block the active sites – as the surface is continually renewed. Many successful examples have been demonstrated, and there have even been commercial applications, but limited thermal stability has restricted their use to below about 200°C – well below the optimum temperature for many reactions.

Peter Wasserscheid and colleagues at Friedrich-Alexander University of Erlangen-Nuremberg in Germany used a liquid film comprising a small quantity of palladium dispersed in gallium, which melts at just 29.7°C, on a porous glass substrate. This is quite different from previous supported liquid catalysts, explains Wasserscheid, because the reactants don’t dissolve in the metal: ‘It’s a surface of the liquid reaction,’ he says. The researchers believe that ‘the active site is a single palladium atom in a lake of gallium’.

The team tested the catalyst against state-of-the-art commercial solid catalysts such as platinum on alumina for the dehydrogenation of butane. ’Alkane dehydrogenations are among the most useful reactions in technical organic chemistry, because, if you want to convert unreactive alkanes into feedstocks for the chemical industry, the first step you have to do is to convert them into reactive, unsaturated compounds,’ explains Wasserscheid. At 445°C, their catalyst showed comparable activity and selectivity to the platinum catalyst, but whereas platinum lost 40% of its activity in about 20 hours, the new catalyst retained almost all its activity over 100 hours of operation time.

The researchers now intend to investigate similar catalysts’ activity for other reactions. ‘We believe that this new way of presenting a metal atomically dispersed to a feedstock may give rise to reactivity for, say, nickel that has never been attributed to nickel,’ says Wasserscheid. ‘Electronically this nickel in gallium is quite different from nickel surrounded by other nickel on the surface of a nanoparticle.’ Wasserscheid believes this new type of catalyst has ‘great potential’ in industry, although he notes that ’if you come along with something completely different from what people are used to, you generate a lot of questions such as whether it can be handled, whether it can be produced on a large enough scale and, if it does lose its activity, whether it can be regenerated the same way we regenerate today’s catalysts’.

Bert Weckhuysen of Utrecht University in the Netherlands says the work is a good demonstration of ‘what may become possible with this approach’. He notes, however, that further work is necessary to confirm the exact state of the palladium in the gallium, and adds: ‘I would have taken propane dehydrogenation as the catalytic reaction of interest as it requires higher temperatures and therefore the effects of coke formation and side reactions such as cracking would become more evident.’

‘It’s really beautiful work,’ comments Kenneth Seddon of Queen’s University Belfast, UK. ‘It’s the kind of paper that, when you read it, you wish it was yours!’