Could physical and chemical processes happening when certain foods and drinks enter our mouth be useful in catching meals in future? That’s a prospect that Feng Zhou at the Lanzhou Institute of Chemical Physics in China and colleagues have raised by studying the mouth-drying phenomenon known as astringency. They’ve measured how tannic acid diminishes saliva proteins’ lubricating effect – and then informally shown that a similar effect makes it easier to grab slippery fish. ‘We believe the underlying astringent molecular mechanism is rather universal,’ Zhou tells Chemistry World. 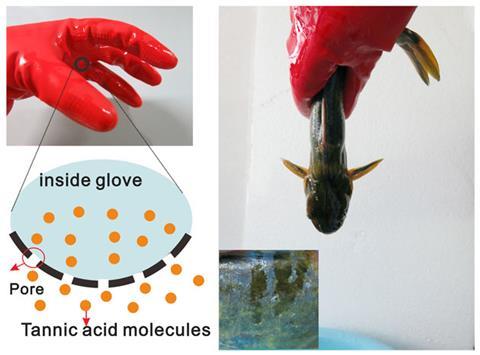 If you drink wine or coffee, or have eaten unripe fruit, you’ve probably experienced astringency’s mouth-roughening, puckering sensation. That’s the loss of saliva’s ‘miraculous’ lubricating ability, explains Paul Breslin from the Monell Centre, a taste and smell research institute in Philadelphia, Pennsylvania, and Rutgers University in New Jersey. Mucin proteins secreted in saliva are unusual in being able to lubricate under the extremely high pressures our teeth exert. Breslin, who wasn’t involved in the new research, says that’s useful because if they couldn’t ‘you’d have no teeth by age 30, you’d completely wear them down’.

Proteins commonly interact with polyphenolic compounds from food and drink, including tannins, through hydrophobic interactions and hydrogen bonding. Tannic acid is consequently widely used as a ‘protein precipitator’ that helps extract proteins from solution industrially for purification. ‘Whenever these are put in the mouth they’ll precipitate proteins in saliva, and interfere with lubrication,’ Breslin says. The astringency we experience when we eat or drink tannin-rich substances isn’t strictly a taste, he adds, but the feeling of increased friction.

While scientists already knew this basic principle, Zhou’s team wanted detailed friction measurements. They therefore used a tribometer that ran a soft silicone ball over a glass surface coated in mucin to get this data. Adding tannic acid caused the friction between the surfaces to rise rapidly. Increased tannic acid concentrations further increased friction and extended the time taken for lubrication to return to normal. Red wine and a coffee bean solution caused similar increases in friction. By contrast milk’s fatty, protein-rich composition acted as a lubricant.

The one that didn’t get away

Having collected that data, Zhou’s team moved on to show what it meant. To more directly imitate conditions in our mouth, the scientists made a tongue-shaped blob of polyacrylamide hydrogel, whose chemical composition also made it sensitive to polyphenols. In water it was flexible with a low-friction surface, readily sliding off the scientists’ fingers. Tannic acid, however, made the gel sticky, shrinking it due to dehydration.

Lubricating proteins are not exclusively found in our mouth – they make fish slimy too, providing a means of escape from potential predators. Remarkably, this knowledge prompted Zhou’s team to make rubber gloves containing reservoirs of tannic acid, which oozes out to make catching fish by hand easier. They say that they instantly caught a yellow catfish with them, which was ‘almost impossible with a normal glove’. ‘The proteins on fish skin are precipitated rapidly, which destroys the lubrication layer, so we can catch the fish easily,’ Zhou explains.

Wuge Briscoe, who studies biolubrication at the University of Bristol, UK, says the study is ‘very interesting and very imaginative’. ‘They’ve applied relatively rigorous physical techniques to probe this system that is relevant to “mouthfeel”,’ he says. ‘They’re very clever in designing the experiment and that allows them to draw strong conclusions.’

Breslin agrees that the experiments ‘shed interesting light on some of the things we think astringency is’. He also lauds the efforts to look at the principle outside the human mouth. ‘From an engineering perspective interfering with or enhancing lubrication have all kinds of implications for human and non-human systems,’ he adds.

However, Breslin highlights that Zhou’s paper doesn’t contain enough data to definitely say that the fish-catching glove works. Briscoe similarly notes that the experiment uses a freshwater fish, and that ‘the sea is salty, so the interaction between tannic acid and the proteins would be heavily influenced by that’. ‘Whether they can catch a fish in seawater remains to be seen,’ he says. Zhou, in turn, emphasises that the experiment was just a demonstration, conceding that it is a long way from becoming a common fishing method.