An NMR technique that allows solid, gel and solution-state chemistry to be studied simultaneously has been applied to a living organism for the first time.1 By demonstrating the technique on live shrimp, the US-led team hope the method will eventually unpick chemical processes in larger biological systems. 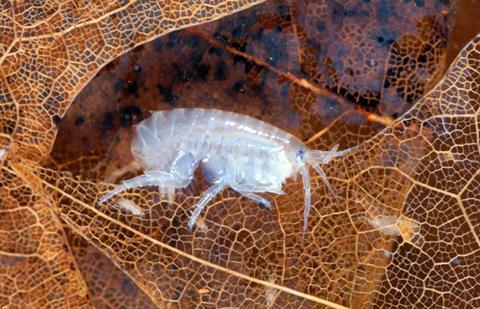 Whilst solution-state NMR spectroscopy and magnetic resonance imaging (MRI) routinely explore living systems, they only reveal information on fully solubilised molecules. If you want to study insoluble biological material such as membranes, muscle or bone, solution-phase NMR won’t work. Yet to combat diseases such as Alzheimer’s and Parkinson’s, caused by soluble proteins crystallising into solid fibres, it’s essential more information is gained about the chemistry occurring across these interfaces.

Unlike traditional NMR techniques, which require separate instruments to study solid and solution phases, comprehensive multiphase nuclear magnetic resonance (CMP-NMR) spectroscopy, first reported in 2012,2 allows information on all states to be obtained using a single probe. André Simpson at the University of Toronto, Canada, who led the development of the technique, highlights its potential to monitor biological processes in real time. ‘CMP-NMR lets you study everything – we can effectively “watch” how drug molecules penetrate a cell wall from being in the dissolved state.’ Held within a spinning rotor, the shrimp obtain oxygen through a hole in the vessel cap.

Of course, an NMR spectrum of an entire organism is complex – a veritable prawn cocktail of signals. Conveniently, CMP-NMR can probe individual phases based on the extent of molecular diffusion in the different states – filtering data, for instance, on just the gel-state components.

NMR expert Alan Kenwright, from Durham University, UK, sees the potential but thinks it’s too early to tell whether the method will bring new insight. ‘A single probe capable of recording high-resolution NMR spectra in multiple phases is certainly interesting and in this context allows the acquisition of spectra from different phases that are directly related, since they come from the same organism. It remains to be seen how much additional information the probe provides compared with measurements using separate dedicated instruments.’

Simpson tells Chemistry World they’re developing larger probes. ‘With present technology we can build them up to 7mm – large enough to study small fish.’ Whilst in theory, the probe size could be scaled further, it’s unlikely we’ll be seeing a human sized probe soon – additional considerations such as spin rate and magnet size present significant challenges.

Aside from being small, shrimp are also model species for toxicity testing. Simpson hopes CMP-NMR may change the way we perceive and measure toxicity. ‘At present we use quite strong indicators to assess toxicity – animal models which consider reproductivity, growth and death don’t show sub-lethal toxicity at all. Tools like CMP-NMR are important to better understand a compound’s effect before it’s released.’