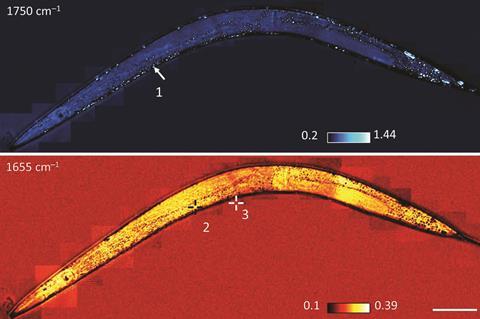 An infrared microscope that can image living cells in 3D has been made by scientists in the US. The tool can also probe deeper into cells to track the movement of individual proteins and even drug molecules.

Microscopy has undergone a revolution in recent years with an array of instruments producing crystal clear images of cellular processes. Perhaps the landmark moment was the 2014 chemistry Nobel prize when fluorescence microscopy was recognised for unveiling hitherto unseen cellular structures at nanoscale resolutions.

But such increases in fidelity have failed to materialise for IR imaging – a method that could detect individual cells and molecules without the need for fluorescent labels. The reason for this failure is simple – its wavelength. As water strongly absorbs IR radiation, such microscopes can only resolve dead, dried tissues. Add to this that a typical IR wavelength is bigger than a single cell, and the technique is severely limited in what it can capture.

‘Our technique addresses all of these … difficulties using a pump–probe method,’ says Ji-Xin Cheng from Purdue University. Cheng’s team has now bypassed IR’s diffraction limit to capture the movement of proteins and drugs within cells.

To do this, the scientists first fire a mid-IR laser at the sample, the pump, which is subsequently absorbed. This excites the molecules and leads to changes in both the temperature and refractive index within the cell or tissue. If the team were to simply look at this excited sample, however, they would encounter the same problem countless others have had with IR imaging. The trick is to then expose the sample to an optical light probe beam.

‘Using another visible beam [we can] measure the local changes in the refractive index of the sample induced by the IR laser,’ comments Cheng. ‘In this case, we can [image] living cells because the visible beam can go through the cells … and also the resolution is now determined by the visible probe beam, which is 10 times better than the IR imaging.’ This approach allows the team to probe the sample at different depths and build up a 3D image.

With the large bump in resolution, the team has captured the movement of lipids and drugs in cells – all in the IR domain. The custom-built microscope is so powerful the team also imaged lipid and protein transport in a live roundworm without the need to tag or label molecules.

But Cheng hopes the technique will extend beyond chemical curiosities in worms. ‘We hope this can be used to see single bacteria with IR, which was not possible before,’ he says. ‘This could enable early detection of an infection or some other infectious disease.’

‘This new technique has a bright outlook,’ says Michel Orrit, a physicist with expertise in single-molecule optics based at the Leiden Institute of Physics in the Netherlands. ‘It can obviously be applied to biological and medical samples for functional analysis of these systems, metabolic activity and chemistry, and molecule-based diagnostics of diseases.’