Discovery may help scientists to produce e-readers with colour screens 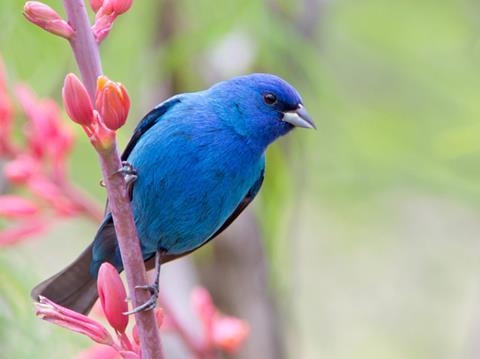 The striking blue of Passerina cyanea is a result of microstructures in its feathers. But no natural structural red exists

Purple, green, blue – photonic glasses can produce a wide variety of colours. But not red, which is mysteriously absent from both manmade and natural microstructures. Now, researchers in the US and South Korea have revealed the reason why, and have a method to produce the missing colour that could have applications in the computer-display industry.

A lot of colours are the result of pigmentation – chemicals that absorb certain wavelengths of light, leaving the remaining reflected wavelengths to make up the colour that is seen. But colours can also appear when rays of light are scattered off microstructures, interfering constructively with one another at certain wavelengths.

Such structural colouration is seen in iridescent objects like opals or peacock feathers, the colours of which change depending on the angle the object is viewed from. However, structural colouration can also produce colours independent of viewing angle. Microstructures that do this are called photonic glasses and are behind, for instance, the deep indigo colour of the American bird Passerina cyanea.

The exact colour produced by a photonic glass is determined by the separation of its scattering elements, so that a smaller separation gives a bluer colour and a larger separation gives a redder colour. On this basis physicist Vinothan Manoharan at Harvard University in Massachusetts and colleagues attempted to produce a pure red photonic glass. But when they tried they were disappointed: they could only make purple. Apparently their photonic glass – made from a suspension of microscopic spheres – contained a stubborn blue component that was contaminating the red. ‘The presence of the blue peak makes these samples look purplish or pink, as opposed to pure red,’ says Manoharan.

Indeed, throughout nature there appear to be no examples of pure red photonic glasses – only blues, greens and purples. Using scattering theory, Manoharan’s group came up with a simple model to explain the contaminating blue component. It showed that the extra component came from backscattered light that was interfering inside the microscopic elements. If the elements were not solid but hollow, the model showed, this backscattering would be suppressed and a pure red photonic glass could be made.

Physicist Shinya Yoshioka at Osaka University in Japan admits that he too has noticed the additional shorter-wavelength component in photonic glasses and agrees that it leaves pure red difficult to produce. ‘I think their findings are important because it will make scientists pay attention to the presence of the additional peak and its effect on the colour,’ he says.

Now that his group has a formula for red photonic glass, Manoharan believes it could, in the long-term, have applications in electronic paper computer displays. Although manufacturers of e-book readers have had a lot of success so far with black and white reflective displays, none has yet been able to produce a full colour version. But Manoharan, who has been developing red photonic glass with the Korea Electronics Technology Institute, believes a shorter term application, within roughly five years, will be in paints and coatings.