Overuse of traditional chemicals could be tackled using nanotech 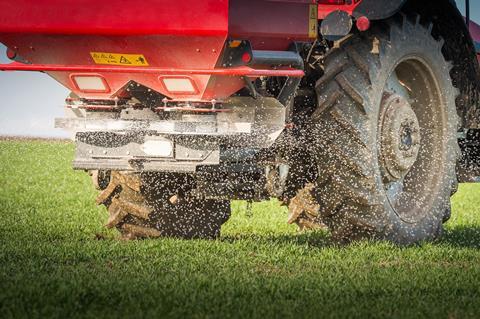 A nanocomposite fertiliser developed by US researchers has been shown to outperform conventional fertilisers, having a greater effect on plant growth with less frequent use. The findings may offer a solution to current agricultural problems of fertiliser overuse and water pollution.

Presented by Pratim Biswas from at Washington University at the American Chemical Society’s (ACS) spring meeting in New Orleans, the smart fertiliser is a nanocomposite of nitrogen, phosphorus, potassium, zinc, and titanium. Its particles are in the range of a few micrometers, and the inclusions are generally between 20 and 100 nanometres.

‘A profound change has to occur in the way in which we produce our food, and the agricultural system, of course, has to be altered,’ Biswas told ACS delegates, adding that food production will need to grow around 50% by 2050 to keep pace with population growth.

The nanocomposite fertiliser that he and his team have developed increased plant biomass growth production by about 26% over conventional fertilisers. Foliar delivery proved particularly effective, increasing the growth of certain plants by up to 97% above those treated with traditional fertilisers, he said.

The nanotechnology also cut fertiliser use dramatically, as the smart fertiliser only had to be applied about one-third as often as its conventional counterparts.

Biswas described conventional fertilisers as ‘bulk materials with large granules’ whose production demands many energy-intensive steps. In contrast, he said, the nanocomposite fertilisers that his team has created can be custom-designed to have much smaller particles and a desired composition, and synthesised in a single low-energy step.

The smart fertiliser is deliverable in various ways, including by adding it during seed preparation along with nutrients or protective agents that guard against microbes or insects. ‘I can do this in a bulk treatment process, or as an aerosol spray with the appropriate constituents and coat my seed,’ Biswas explained. The product can also be applied to the soil, or delivered as a foliar feed.

Promising results aside, questions remain about potential safety issues associated with the use of nanoparticles in the environment for agricultural or other purposes. Biswas agreed that these issues require serious consideration, and recommended that controlled pilot studies should be carried out to assess them. ‘One has to be careful that you don’t have these other additional ripple effects,’ he noted.

Nevertheless, the data indicate that nanocomposite fertilisers are quite promising from a safety perspective. Biswas suggested that this new kind of fertiliser could reduce risks to the environment, including to pollinators, by reducing the total quantity of fertiliser used and enabling targeted nanoparticle delivery to plants. For these reasons, Biswas said that the product would ‘overall have a net effect of lower negative impact on the environment’.