As a chemist who has spent many years in the research and development departments of the coatings industry, Chris Simmons knows the struggle of working with nanoparticles, particularly in powder form. ‘There were always concerns about a lack of industrial scale and the perception of costs that would outweigh the benefits. However, as a formulator, the big issue was incorporation and dispersibility,’ he says. ‘It’s very, very hard to de-agglomerate nanoparticles that naturally attract towards one another and disperse those into a formulation.’

Earlier this year, Simmons joined Promethean Particles, a Nottingham, UK-based company that aims to make formulating with nanomaterials easier by providing them as liquid dispersions. 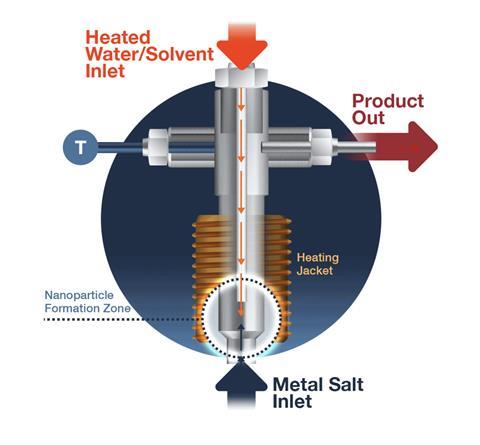 Promethean’s pitch is that liquid dispersions reduce the risk of particle agglomeration, make nanoparticles easier to integrate into coatings or other matrices, and do away with the costly extraction equipment that dry powders demand at both R&D and production levels. The nanoparticles are provided within water or solvent, which can also have the added benefit of protecting particles, such as copper, from oxidation. And they do not come with the safety and handling issues, such as inhalation risks, of dry powders.

Simmons and his team can bypass the conventional powder form thanks to hydrothermal synthesis and a patented reactor. The company’s technology combines two streams – one of heated water or solvent, and another of the material that should be created in nanoform, such as metal salt - in a counter-current reactor arrangement. This flow process is designed to create a super-saturated solution for just the briefest moment, allowing nanoparticles to form.

The technology is the brainchild of the company’s founder, chemical engineer Ed Lester, who painstakingly fine-tuned the reactor in the early 2000s. The sticking point was avoiding blockages, remembers Selina Ambrose, Lester’s former PhD student at the University of Nottingham, and now Promethean’s technical manager. ‘[Lester] did a lot of trials of different reactor designs before he overcame those blockage issues, which finally meant that the particles could form and flow out quite nicely,’ Ambrose says. Once Lester perfected the process and reactor design, he filed a patent and formed Promethean at the end of 2007.

The technology transformed the production of nanoparticles from the conventional batch process to a continuous flow. ‘One of the biggest differences between this kind of continuous flow method and batch production is the time which the nucleation requires,’ Simmons says. Batch production methods can take between eight and 16 hours of operation time. ‘Because of the high turbulence within our reactor, it nucleates nanoparticles within fractions of a second. That enables a level of scale and efficiency that traditional methods have often been limited by,’ Simmons explains.

The process also minimises batch-to-batch variation, and it allows for easy scale-up to produce industrial quantities of nanomaterials, whereas equivalent batch processes are limited by reactor vessel volumes. Promethean has scaled up to a capacity of up to 1000 tonnes of nanoparticles per year, and now claims to operate the world’s largest multi-nanomaterial manufacturing plant.

In its early days, the company made ceramics – metal oxides that can be used in reflective coatings, high-temperature materials, catalysts or as strengthening materials for fabrics. Today, it can make materials in eight different materials classes, including metals and metal oxides. Within some of those classes, such as doped metal oxides, there is a virtually limitless combination of materials that the team can produce, Simmons and Ambrose explain. Currently, the company works on products for applications ranging from carbon capture and heat-transfer fluid efficiency improvements, to de-icing of aircraft and personal protective equipment (PPE) with the biocidal properties of nanocopper.

One of the team’s biggest development areas is producing metal-organic frameworks (MOFs), says Ambrose: ‘We’ve been doing a lot of work in the last few years on developing scalable, cost-effective methods of producing MOFs. We have seen a significant increase in interest from customers looking at MOFs for carbon capture and other related applications.’ 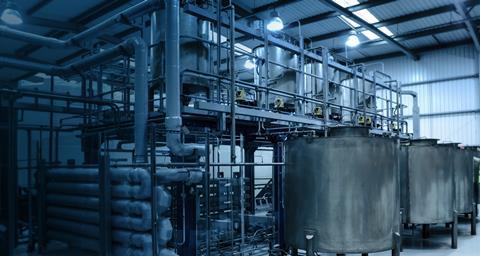 The effort has resulted in a collaboration with Drax power station, agreed in September. Part of a suite of projects funded by the UK Carbon Capture and Storage Research Centre (UKCCSRC), project Picasso – Pilot-scale Carbon Capture using Solid Sorbents – aims to highlight the potential of MOFs as a viable industrial carbon capture technology.

Promethean will be providing the MOFs to be incorporated into a carbon capture system designed by the University of Nottingham. This will then be installed directly onto a flue gas stream from Drax where the carbon uptake will be monitored and measured.

‘It’s an exciting time for MOFs, whose potential has long been scuppered by the complications involved in producing them outside of the lab,’ says Simmons. ‘We have the ability now to scale up these fascinating high-surface-area materials and use them for high-efficiency carbon capture,’ he says. ‘I expect this to be a really key area for us in the future.’