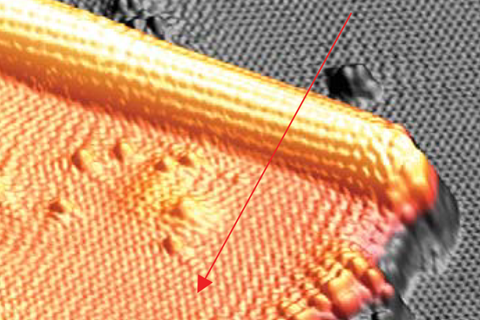 Tiny graphene sheets only a single atom thick have been folded into nanosized crêpes that could eventually be made into molecular machine parts.1 This is the first time researchers have been able to not only fine-tune the graphene sheets’ twist angle – and thereby their electronic properties – but also create a tubular edge.

When two graphene sheets are stacked on top of each other, their properties change depending on how one layer is twisted against the other. While the 2D material is a conductor, stacking them can create insulators or superconductors.

Scientists had previously tried to fold graphene or graphitic sheets with the aim of gaining more control over their shape – and therefore their properties. However, this was usually accompanied by tears or damage.

A team of researchers from China and the US has now used a scanning tunnelling microscope (STM) to fold the tiny fragile sheets in half, creating graphene crêpes only around 10nm wide. The nanopancakes could be folded and unfolded multiple times without any damage.

The STM’s atomically sharp tip can lift up one pancakes’ sides, drag it sideways to fold it over and then drop it in place. This allows the researchers to not only precisely select twist angles between up to 60° with an accuracy of 0.1°, but also creates a tubular edge.

Scientists can fold and unfold graphene sheets without tearing them

Like a graphene nanotube, the edge can be imbued with different properties – metallic or semiconducting – depending on its size. Since the tube is attached to the graphene crêpe, it can modify the structure’s electronics. The edge also makes the entire crêpe chiral, with the mirror image made by reversing the folding direction.

The team hopes their origami method could help fabricate nanomachine parts, like the graphene tube and sheets that were made into a nanoturbine in 2014.2 Eventually, the researchers envision using the 2D material’s tuneable electronics to create graphene quantum machines.