Nasa probe sets off for Mars

Suite of instruments will investigate why the red planet’s atmosphere vanished, leaving it a drier, colder place 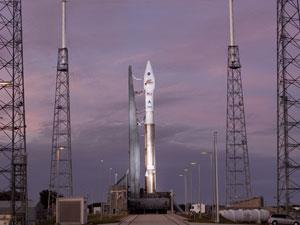 Nasa’s latest Mars mission – the Maven (Mars Atmosphere and Volatile EvolutioN) orbiter – has begun its 10-month journey to the red planet after its successful launch this week from the Cape Canaveral Air Force Station in Florida, US.

Maven will be the first spacecraft to spend most of its time analysing Mars’s upper atmosphere, and will be investigating the planet’s climate history. Data from previous missions, such as the Curiosity rover and other orbiters, suggest the desert-like surface of Mars was once a warmer, wetter place, but its present day atmosphere is extremely thin. Maven will investigate what may have caused compounds such as carbon dioxide, nitrogen and water in the atmosphere to disappear into space.

The probe is kitted out with eight instruments to investigate atmospheric composition, the rate of atmosphere loss and the processes that are responsible, including the influence of solar winds – streams of charged particles released by the sun. Among them are a mass spectrometer to characterise the isotopic concentrations of ions in the atmosphere, a UV spectrograph for remote sensing and various sensors that will measure solar wind strength and composition.

Maven is currently on track to reach Mars in September 2014, where it will be put into an elliptical orbit ranging from 6220km to 150km above the surface. It will take five ‘deep dips’ into the atmosphere to take measurements over the primary mission period of one year, and has enough fuel to stay operational for many years. It will also take some measurements of the comet Ison during the journey to Mars, which will help to calibrate its instruments.

India’s Mangalyaan spacecraft is also on its way to Mars, after a successful launch two weeks ago. Mangalyaan is principally a test bed for Indian space technology, although it will also be mapping the morphology and mineralogy of the red planet. If all goes according to plan the two orbiters will arrive within a few days of one another.