Researchers in the US have combined an autocatalytic click reaction with automated liquid handling and UV-Vis spectroscopy to create a simple neural network that can classify binary images.

Chemical computing takes inspiration from the complexity and efficiency of living systems and aims to develop chemical counterparts that can perform functions such as information processing and storage. To date, DNA has been the molecule of choice for studies in this area. But simple chemical systems based on small molecules, which can tolerate a wider range of reaction conditions and require fewer components, are starting to open up new avenues in chemical computing. 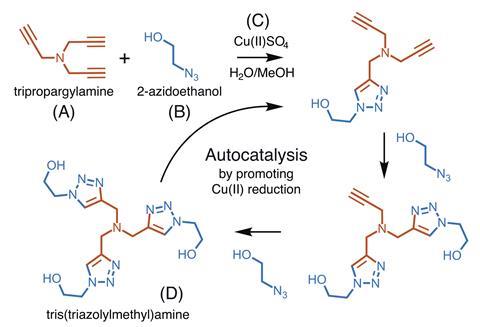 An overview of the copper catalysed azide–alkyne cycloaddition reaction, showing the buildup of triazole branches on the amine backbone of (A) after each azide (B) incorporation. The branched product (D) catalyses its own generation by promoting the reduction of Cu(II)

The researchers used an established copper-catalysed cycloaddition reaction between 2-azidoethanol and tripropargylamine. This click reaction produces tris(triazolylmethyl)amine, which increases both the production and activity of Cu(I), resulting in autocatalysis. A key advantage of this work is that ‘the click reaction is really robust’ and can tolerate different conditions, comments Ekaterina Skorb, an infochemistry researcher from ITMO University in Russia. ‘It’s a really simple reaction and [has] clear rules on how we can use it, and what is input and output.’

In a winner-take-all neural network, potential classes race between each other and the class that reaches a specific condition first is deemed the winner. In this case, the researchers used the reaction halfway point (transition time, t1/2), which could be programmed by tuning the initial concentration of tris(triazolylmethyl)amine, as the condition for image classification. During training, the network weights were tuned so that the class reaching the t1/2 first represented the image class most similar to image input. 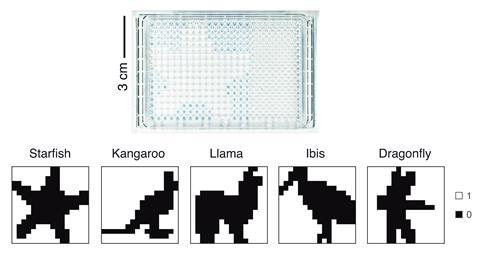 Top: Image of the data plate, containing a binary image of a starfish represented in the presence (blue) or absence (transparent) of pre-reacted catalyst in solvent filled wells. Bottom: Example images from each of the considered classes

To implement the winner-take-all network chemically, the team encoded binary 16×16-pixel image on a well plate, using the initial concentration of tris(triazolylmethyl) to specify pixel color, with one position representing one pixel. Next, the researchers used a robotic fluid handler to remove a certain volume, dependent on weights determined through network training, from each well. The samples were added together into individual pools for each potential image class and mixed with fresh reagents. Finally, the pool that reached the transition time first was classed as the winner, identifying the image class.

Click reactions will likely be familiar to many researchers. But Skorb says this work is important because it ‘gives new insights into how people can use it for computer science’. Rosenstein and colleagues anticipate that autocatalytic reaction networks will play a significant role in new chemical computing systems. With a view to the future, Skorb remarks that ‘it would be really great if we can find a way to combine chemical systems and biological systems,’ adding that since click chemistry works in water, it could be combined with a more sophisticated chemical computer to make an artificial brain.