Single stranded DNA machine walks around, picks up and drops off individual molecules

‘It walks, picks up cargo molecules and sorts them to their specific destinations, autonomously,’ explains bioengineer Anupama Thubagere, describing the DNA robot she and a team led by Lulu Qian at California Institute of Technology, US, have developed. Inspired by the collective behaviour of social insects such as ants, the robot’s design is simple – yet it is the first DNA machine to independently perform multiple tasks. 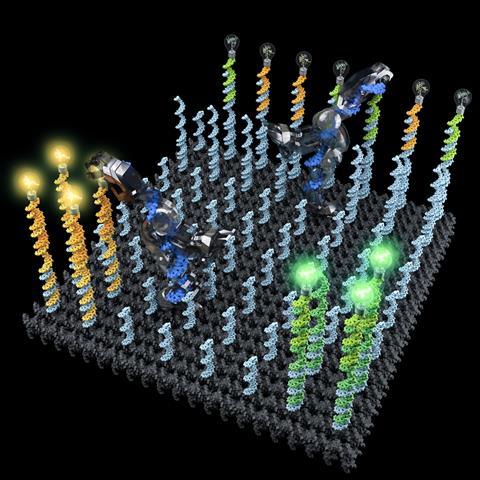 So far, the repertoire of DNA robots has been limited to walking along a prepared path or picking up a molecule when prompted by a chemical signal. And even these easy tasks often involve complex setups with many bespoke DNA strands. Qian’s team, on the other hand, keep things simple. The robot itself is just one continuous string of single-stranded DNA, 53 nucleotides long, composed of different sections: two ‘foot’ domains are joined by a leg strand, with a further arm strand that ends in a ‘hand’ domain. The robot can move and sort randomly scattered molecules into neat piles without requiring any external signals or energy input because all of its movement, as well as the cargo pick-up and release, is controlled by strand displacement reactions.

Its testing arena is covered in an array of single-stranded DNA ‘pegs’, composed of complementary foot and leg sections, that stick up from the surface like fibres in a fluffy carpet. With its leg and one foot bound to a peg, the robot’s other foot is always free to jiggle around until it finds a toehold in the foot section of a neighbouring peg. This weakens the first foot–leg–peg interaction, and the robot migrates to the new peg. Moving randomly, the robot eventually explores the entire surface.

The ‘robot’ has two feet joined by a leg to migrate between the foot-and-leg peg strands that make up the floor of the testing area. The robot’s hand and arm sections are complementary to the hand and arm strands on the cargo, enabling the robot to pick up the cargo. The cargo and goal strand are fully complementary, resulting in a complete double-strand complex that ends the cargo’s journey.

Cargo molecules are also scattered around on the surface, each with a complementary arm and hand DNA strand. If the cargo is on an adjacent peg to the robot, it first finds a handhold in the robot’s hand section and the rest of the cargo strand then migrates over to the robot. But the cargo also has a ‘cargo’ segment that remains free while it is bound to the robot. If the robot brings the cargo near to a matching ‘goal’ strand in the drop-off area, the cargo and goal strands are entirely complementary and so form a complete double-stranded DNA complex, ending its journey.

‘If we were to design a macroscopic robot to sort cargo, we’d probably build a memory into the robot so it can tell the difference between different cargo types,’ says Qian. Her DNA machine, however, doesn’t recognise different cargoes. Instead, the information about what molecule needs to go where is encoded in the cargo molecule and its destination – the robot only needs to transport the molecules. ‘[We] take advantage of what a collection of molecules can do, where the smarts are distributed into different molecules,’ Qian explains.

‘It’s a beautiful system,’ says DNA nanotechnology researcher Kurt Gothelf from Aarhus University, Denmark. ‘What astounds me is the simplicity with which this advanced behaviour can be obtained. It’s really a big step forward for artificial molecular robots.’

Within ten hours and taking around 300 steps, a single robot could sort six molecules of two different fluorescent dyes; five robots complete the same task in less than an hour. Qian already has ideas on how to make the robots more efficient: ‘We are interested in designing a pheromone‐like signal that the robot can leave behind and mark where they have been, so they can be programmed to find the direct path between two locations, similar to how ants find direct paths between nest and food.’

‘If we truly master the ways for engineering molecular machines, we would be able … to send them to places that are perhaps too small for humans to go to, for example, inside a blood stream,’ Qian predicts.