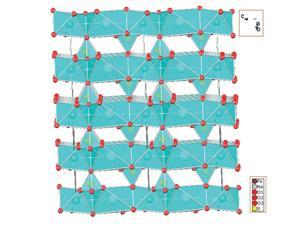 An international team of scientists led by the inventor of the lithium ion (Li-ion) battery has put forward a new cathode material for its potential successor, the sodium ion (Na-ion) battery.

The ubiquity of the Li-ion battery is unparalleled in current mobile technologies. But its potential for large-scale applications in electric vehicles and energy storage is hampered by the high production costs and finite supply of lithium. Many researchers hope to overcome this problem by replacing it with sodium, which is cheaper, easier to process and almost infinitely abundant.

‘The problem is the size of the sodium ion,’ explains Preetam Singh from the University of Texas in Austin, US one of the scientists behind the research. ‘You can’t simply duplicate lithium ion technology by directly substituting lithium for sodium in the chemical structures of various cathode and electrolyte materials, because the sodium–sodium interaction is much stronger and so you cannot get good rate performance. The main drive for our research was to find something that was different from the old structures.’

Singh is part of an energy materials research team led by John Goodenough, the inventor of the Li-ion battery. In their recent study they present the mineral eldfellite (NaFe(SO4)2) as a potential Na-ion cathode material, which is comprised of Na+ and Fe3+ layers separated at a fixed distance by SO42- polyhedra. These fixed spaces allow the diffusion of sodium ions, meaning that the material is capable of realising 80% of its theoretical maximum specific capacity – the amount of charge it can accommodate per gram of material.

‘I think this is a very unique material for the commercial realisation of the Na-ion battery,’ comments Shinichi Komaba, an expert in battery materials from Tokyo University of Science, Japan. ‘Most interestingly, it works as a 4 volt class positive electrode upon the Fe2+/Fe3+ redox couple in both Na and Li cells – I expect more new materials will be found by such a combination of sodium ion and lithium ion chemistry.’

‘There are further possibilities for this material which we are currently investigating,’ continues Singh. ‘The magnetic analogues with manganese or nickel would be interesting as we would expect these to have higher power densities. Also we are trying to reduce the number of sulfate linkages, as this could increase the material’s capacity.’