The first rechargeable sodium–carbon dioxide battery has been created with the help of a nanostructured cathode. The cheap and potentially powerful battery could fuel Mars vehicles as the red planet’s atmosphere is 96% carbon dioxide or recycle carbon dioxide emissions on Earth. 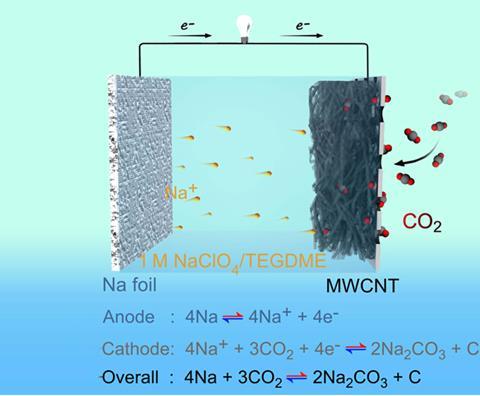 However, the few existing metal–carbon dioxide batteries are non-rechargeable. As they discharge, solid products deposit on the cathode and block the gas channels that allow carbon dioxide to interact with the electrolyte, meaning the electrochemical reaction can’t be reversed. Jun Chen and his team at Nankai University in China overcame this flaw using an ether-based electrolyte and a carbon nanotube cathode. ‘We tried different kinds of carbon – active carbon, graphite – but carbon nanotubes performed best because they have a highly porous, three-dimensional structure,’ says Chen. This means the cathode stores the discharge solids without the gas channels becoming blocked.

With an energy density of about 1000Wh/kg, Chen’s battery already surpasses its commercial counterparts. ‘Lithium-ion batteries that are used in Tesla electric cars have only about 180Wh/kg,’ says Chen. And, he adds, even after 200 discharge–recharge cycles, they saw almost no drop in the battery’s capacity. 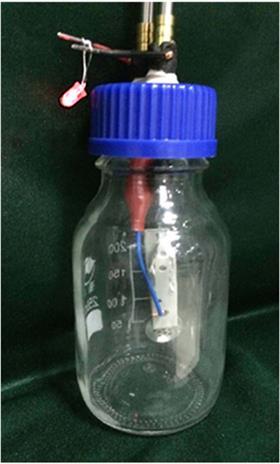 However, there are still challenges to overcome before a sodium–carbon dioxide battery will see the inside of an electric car. Chen admits that water is detrimental to the battery, it only works with pure carbon dioxide and their coin-sized setup is currently too small to power anything more than a tiny light emitting diode.

‘Chen’s research is original and important, but we have to be careful when we evaluate the practicality of the work,’ says Doron Aurbach, a researcher at Bar Ilan University, Israel and leader of the Israel National Research Center for Electrochemical Propulsion. ‘Translating nanotechnology to practical batteries is not trivial,’ he adds. Chen and his team are now working on a larger, more robust battery that might be able to recycle exhaust carbon dioxide in a hybrid car.