The I-band of protein polymer titin is responsible for the passive elasticity of muscles and consists of hundreds of globular macromonomers. Many scientists dream of making biomaterials that can mimic titin’s mechanical properties – but that has proven difficult. 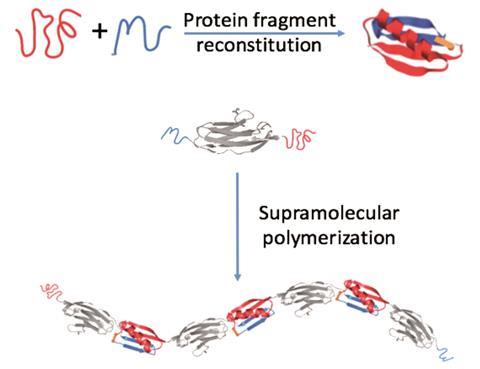 Protein fragment reconstitution is a mechanism by which some protein fragments recognise and self-assemble into the folded conformation of their native protein when split in two. Starting with the model protein GB1 (the immunoglobulin binding domain B1 of streptococcal protein G), Hongbin Li from the University of British Columbia and colleagues have taken advantage of this mechanism to make a protein polymer that mimics the I-band part of titin.

GB1 can be reconstituted from the fragments GC and GN. Li’s team engineered bifunctional protein macromonomers that sandwiched an immunoglobulin-like domain from human cardiac titin (I27) between GC and GN. These GC–I27–GN units then underwent supramolecular polymerisation, via the reconstitution of GC and GN, to produce protein polymers.

These protein polymers had a molecular weight of 500KDa – larger than previously reported reported protein polymers, which had weighed approximately 400KDa and had a lower degree of polymerisation.2 The team hope the protein fragment reconstitution-based method will provide new opportunities for creating protein-based biomaterials.

Correction: This article was updated on 12 November 2019 to clarify the weight of previous reported protein polymers