Polymer 'worm' is walking on sunshine

A new polymer ‘worm’ that can make wave-like motions in response to light, can crawl and even carry objects. The researchers behind the material hope that it might one day be used in self-cleaning surfaces.

The new liquid crystal polymer incorporates an azobenzene-derived dye which quickly changes from a cis to trans conformation when stimulated by ultraviolet radiation, and returns to its original state when in shadow. This switching of molecular configuration when in light or dark is key to the material’s ability to propel itself at speeds comparable to those of a caterpillar.

‘With respect to the light source, the wave can be moving away or moving towards the light source. This is achieved by positioning the molecules in the plastic film in an asymmetric way,’ says Dirk Broer of the Eindhoven University of Technology, Netherlands, who led the project. 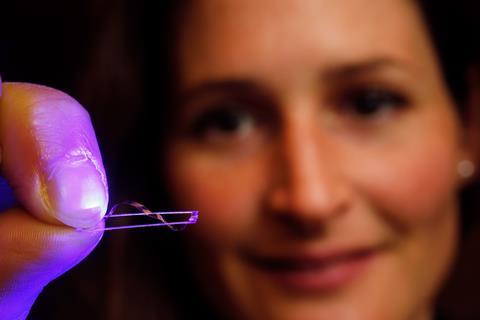 ‘On one surface, the rod-shaped liquid crystal molecules have planar alignment parallel to the ribbon’s long axis – like pencils lying parallel on a table,’ explains Robin Selinger who led a team at Kent State University, US, that developed computer simulations to explain how the material’s movement is brought about. ‘On the other surface the rod-shaped molecules have homeotropic alignment, lying perpendicular to the surface – like pencils standing up balanced on their points.’

This structural arrangement means that when the film is treated with light, one side of the polymer will expand while the other contracts. This causes the material to flex in such a way that parts of the material that were illuminated become shadowed and vice-versa, leading to the wave-like movements.

The worm has turned

By attaching a 2cm strip to a rectangular frame and shining UV light at it from a fixed source, the research team created a light-driven robot that crawls forwards in a manner somewhat resembling a break-dancer doing ‘the worm’. Other demonstrations showed strips of the polymer moving a glass rod up an incline and shaking off sand grains.

‘This is really a nice piece of work to bridge the fundamental findings of photoactuation and photodeformation of these materials with their practical applications,’ says Tomiki Ikeda, who works on photomobile polymers at Chuo University, Japan.

This is echoed by Timothy White, an expert in photonic materials who works at the US Air Force Research Laboratory in Ohio, US, who describes the research as ‘a compelling demonstration of the interplay of photochemistry and mechanics’. He is particularly impressed with ‘the use of designer photochromic units to enable the captivating mechanics’ of the material.

Looking to the future, Broer hopes that at some point the polymer’s wave-like motions may find function in self-cleaning surfaces. ‘For instance, when sand or debris is applied on the plastic foil it can be transported or thrown off the film by the directional transport,’ he says. ‘An application field where we are active in our group is self-cleaning strategies for solar cells in remote area. One can think of solar plants in the desert where you have much sunshine, hardly any rain and no people available to clean the surface of the cell after a sandstorm.’ However, he also notes that as these materials currently absorb UV light, new dye molecules may need to be developed that can operate using other parts of the solar spectrum.

‘So far we have a proof of concept showing how liquid crystal polymer films can generate continuous mechanical wave motion when illuminated with high intensity UV light. Next steps might include further materials development to optimise material properties: reduce how much light is needed, increase how much mechanical work can be performed and increase the speed of material response,’ adds Selinger. ‘In addition we might focus on using our simulation and modelling tools to optimise device design to engineer more advanced prototype devices.’