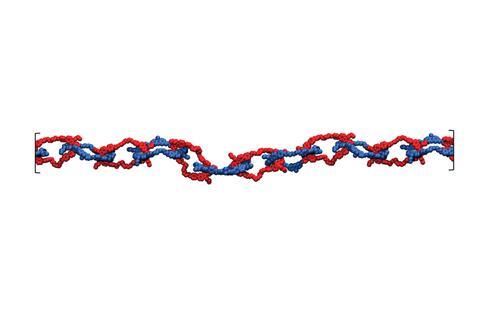 Up to 130 molecular chain links have been assembled into the longest ever polycatenanes – an unexplored class of mechanically interlocked polymers that resembles macroscopic chains.

Catenanes consist of at least two ring-shaped molecules that are, like links in a chain, mechanically interlocked rather than chemically bound to each other. This gives them unusual properties that chemists are starting to exploit for catalysis, drug delivery or molecular machines. Polycatenanes resemble steel chains – flexible and strong at the same time – and they could make excellent shock-absorbing materials.

However, making mechanically interlocked polymers is tricky. The longest molecular chain made to date barely deserves the name polymer – it contains just seven interlocked rings. Now a team led by Stuart Rowan from the University of Chicago, US, has assembled molecular rings into linear interlocked chains up to 26 links long, and branched chains containing up to 130 links.

Key to making these polymers was a metal-templated synthesis – pioneered by Nobel prize laureate Jean-Pierre Sauvage – combined with a purification strategy. After finishing the synthesis, the researchers added zinc(II) to the mixture. The metal ion which prefers to bind with the mechanically interlocked components – a phenomenon called catenand effect. The longest chains accumulate the most zinc ions, making them insoluble and leaving shorter oligomers and monomers in solution.