A 17th century alchemy manuscript handwritten by Isaac Newton has been bought by the US’s Chemical Heritage Foundation (CHF) after being kept in a private collection for decades. 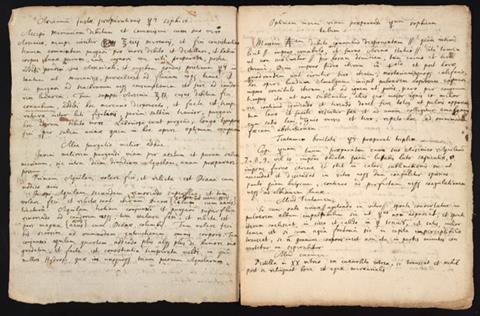 Courtesy of the Chemical Heritage Foundation

The document is a copy of a known text authored by another alchemist, written in Latin, as was common practice at the time. Its title translates as ‘Preparation of the [Sophick] Mercury for the [Philosophers’] Stone by the Antimonial Stellate Regulus of Mars and Luna from the Manuscripts of the American Philosopher’. It describes a process for making ‘sophick’ – short for ‘philosophic’ – mercury.

‘Philosophic mercury was [thought to be] a substance that could be used to break down metals into their constituent parts,’ explains James Voelkel, the CHF’s curator of rare books. ‘The idea is if you break the metals down you can then reassemble them and make different metals.’ The process was part of the effort to make the philosopher’s stone, he adds, a mythical substance that alchemists believed could turn lead into gold.

It is likely Newton used the text as a reference when conducting his own alchemical experiments, although it is unclear whether he ever tried to make sophick mercury. There is no mention of the process in his laboratory notebook, which is currently kept at the University of Cambridge in the UK. But Voelkel says it ‘would not have been out of character’ for him to attempt it.

As well as the copied text, the manuscript includes a description of one of Newton’s own experiments. ‘It’s often the case with Newton’s manuscripts that if they lie around long enough he turns them over and writes something else on the back,’ says Voelkel. ‘In this case there is a note of an experiment that he did. It’s a recipe for distilling a volatile spirit out of lead ore … which corresponds nicely with Newton’s interpretation with various alchemical authors.’

The author of the original sophick mercury paper was a well-known alchemist at the time known as Eirenaeus Philalethes. Historians now know that this was a pseudonym invented by the Harvard-educated chemist George Starkey, one of the US’s first published scientists. Starkey moved to England in 1650, and worked with some of the most eminent chemists of the time, including Robert Boyle.

Although it is not possible to say exactly when it was written, Newton’s copy of Philalethes’ sophick mercury text may pre-date the first known printed version, which was published in 1678. ‘It’s probably the case that he was copying a manuscript that existed before the publication of the printed work,’ says Voelkel. ‘The manuscript he’s copying has at least one mistake in it. At some point the author writes the Latin word ‘ex’ which means ‘out of’ instead of ‘et’ which means ‘and’ – Newton recognises this as being a mistake and corrects it in square brackets. In the printed source this has been corrected.’

Until now, the contents of this particular manuscript had not been made public. It was one of a batch of Newton’s papers sold by his descendants at Sotheby’s in London, UK, in 1936. At that time, many of the texts were purchased by private collectors, but over the years most have been donated or sold back to public institutions. Most of the known alchemical works are now kept at the University of Cambridge where Newton carried out his research.

Now that this particular text has resurfaced, Voelkel says it will be added to ‘The chymistry of Isaac Newton’ project, an online repository curated by Indiana University, so it can be shared and studied more widely. ‘We’ve already imaged it, so the images and the transcription will [be uploaded] and it’ll become a known alchemical document,’ he says.

‘The collection is gigantic … the estimate of Newton’s alchemical output is something like a million words in his own hand. This is just another little page in a corpus of hundreds and hundreds of documents.’