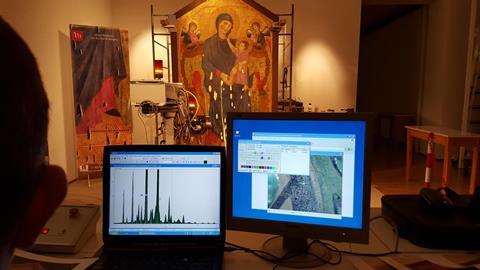 The great beauty of chemistry

La grande bellezza, the Oscar-winning film by Paolo Sorrentino, tells the story of a Roman socialite who has lived his life superficially, never looking beneath the surface of the world around him. For Rocco Mazzeo at the University of Bologna in Italy, this is the way many of us treat our cultural heritage – it’s all around us at all times but we don’t take the time to appreciate it. But just as the lead in the film has a chance meeting that shakes him from his torpor, Mazzeo is part of a project that he hopes can reawaken people’s interest in their cultural heritage – particularly chemists.

An art historian with a chemist is a battle. It can be a nightmare, but the future is there

Mazzeo, a chemist who has devoted his career to the science of conservation, says that heritage science – of which he is a massive proponent – is still a new idea only just coming of age. It brings together science, arts and the humanities to not only save cultural heritage such as iconic buildings, landmarks and works of art but to manage them for future generations. He says that in the past chemists might have worked on just one small problem, such as analysing the structure of an artwork’s paint, but then had no further role in preserving it. As a member of the EU-funded Integrated Platform for the European Research Infrastructure on Cultural Heritage (Iperion CH) Mazzeo is working to change this mind set and get chemists, historians and curators working together. To do this Iperion CH is bringing together universities and heritage science facilities across Europe to create a kind of hybrid research institute – both real and virtual – that can share knowledge and scientific instruments in pursuit of its goal.

Iperion CH started in 2015 and there are now 24 partners from 12 countries. It brings together partners like the Getty Conservation Institute in the US and the Louvre in Paris – the only museum in the world that houses a synchrotron – as well as other European research and conservation institutions. 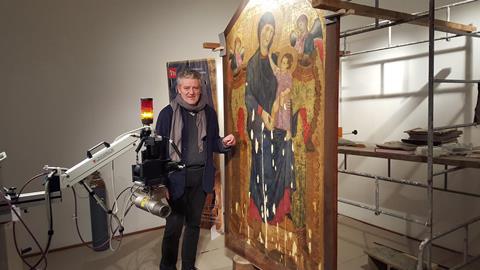 Rocco Mazzeo is an enthusiastic advocate of getting chemists involved in heritage science. Here he is seen studying Cimabue’s Maestà, a panel painting from the late 13th century now exhibited at the Church of Santa Maria dei Servi in Bologna, using portable non-invasive x-ray fluorescence

Cultural heritage is a topic close to Mazzeo’s heart and he says that Europe’s identity is inextricably linked to it. By bringing together researchers across Europe, he believes that a greater understanding and appreciation of the continent’s heritage as a whole can be built up. This is one of the reasons the EU funded the project, he adds.

An example of the type of scientific collaboration that Iperion CH is trying to reinforce is the restoration of Jackson Pollock’s 1947 painting Alchemy. The years had dulled the work, which is a mix of poured and dripped paint, and the owners of the piece, the Guggenheim Museum in the US, were keen to have it cleaned and restored to its former glory. The work was first carefully assessed at the Opificio delle Pietre Dure in Florence using x-ray fluorescence, Raman spectroscopy and a suite of other non-invasive analytical techniques, to identify which paints had been used and the state that they were in. This allowed conservators to tailor the cleaning materials and method to the paints to prevent damage. But the project isn’t just about preserving and restoring cultural heritage. Time is also spent working with model samples in an effort to develop better understanding and new analysis techniques.

Mazzeo says heritage science’s doors are always open to good chemists. While there may not be many full time posts in this field, he urges those with an interest to split their time between their primary research field and heritage science. ‘I don’t think the young generation only has to look to money,’ Mazzeo says. ‘If you want to become rich working in the field of the chemistry of conservation then that won’t happen, and you should become a polymer chemist and work for Dow Chemical and seek executive office.’ But by working in heritage science they will get the privilege of working with masterpieces by Pollock and Raphael. ‘This is also a pleasure and this is a message that I like to pass to this new generation,’ he adds.

Mazzeo says that when he arrived at Bologna, one of Italy’s oldest and most prestigious universities, it wasn’t easy to get heritage science accepted by his peers. But things have slowly changed and now Mazzeo’s colleagues approach him asking to join in. A result of this recognition of the importance of cultural heritage has meant that Bologna now offers a science for conservation master’s degree course enrolling around 25 students from all over the world each year.

But for heritage science to really get off the ground it needs full recognition as a scientific discipline in its own right. Once this happens securing funding for projects will be much easier, Mazzeo says. To achieve this transition the field will have to build up a core of interdisciplinary work that will put it on the same footing as other newer disciplines such as environmental science. He predicts that in 10 years’ time researchers from ever more diverse fields will be working in heritage science making it much more visible.

As for how this young and fast-developing discipline is proceeding, Mazzeo discloses that there’re always a few bumps in the road. ‘It is challenging when you put an inorganic chemist with an organic chemist with an analytical chemist, and they are all chemists!’ he jokes. ‘An art historian with a chemist is a battle. It can be a nightmare, but the future is there.’