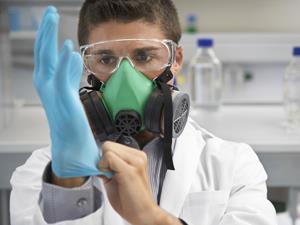 A report of a chemist who developed sensitivity to nickel after working with its nanoparticle form has highlighted how little we know about nanomaterial hazards. Her allergic reaction to the metal started after weighing the powder out in the open as if it were the bulk metal, something Harvard School of Public Health’s Rose Goldman recommends labs avoid. ‘They should have healthy respect for nanomaterials and for workers,’ Goldman tells Chemistry World. ‘They should think about the added protection they should put in right now, when we’re still learning about them. I’d also like to see government agencies and industry putting a lot more money into research on their impact on health and safety.’

Goldman first saw the 26-year-old chemist in 2010; she had been working for three years formulating polymers at a large company that makes metallic inks. The chemist had recently started a project where she weighed spherical 20nm nickel nanoparticles on an open bench, the first time she’d worked with them. She then ball milled the particles to make them even smaller and cleaned up, using only latex gloves to protect herself. Within a week she found that when she was at work her face would flush, her throat became congested and her nose produced excess mucus. Her belt buckle and jewellery – which contained nickel – also began to cause skin rashes. The symptoms eased when she stopped weighing out the nanoparticles, but only went away when she moved to a lab where there was no nickel chemistry.

While nickel is already known to cause allergies, questions arise over exactly what role its nanomaterial form played. Previous research has suggested that nanoparticles might get airborne more easily and have enhanced immunogenic and irritant effects. ‘Did inhaling nanosize nickel create a stronger sensitiser?’ Goldman asks. ‘We don’t have an answer to that, but we know that before she did this type of work she wore rings without a problem. Inhaling nanoparticle nickel, clearly more is going to get in your airways and across the capillaries into the blood. That’s something people need to explore further.’

Jack Harkema, a toxicologist at Michigan State University, US, has investigated the effects of nanoparticle silica in mice, but was not involved in this case. ‘Since there is a paucity of reports of adverse effects of nanoparticle exposure in humans, this case is important because it has a very plausible link between nickel nanoparticle exposure and development of symptoms consistent with allergic rhinitis,’ he says. ‘However, the subject may have had a similar reaction if similarly exposed to larger nickel particles.’

Charles Geraci, programme coordinator for nanotechnology research at the US National Institute for Occupational Safety and Health (NIOSH), adds that no definitive study shows nanoparticles are more potent sensitisers than bulk materials. However, he agrees with Goldman that it ‘seems reasonable to expect higher activity from a nanoparticle’. NIOSH therefore recommends safety measures focusing first on ‘engineering controls’ like improving ventilation or enclosing the materials. NIOSH also advises using suitable personal protective equipment when handling nanoparticles, such as respirators. ‘Similar precautionary guidelines are being used globally,’ Geraci underlines.

Goldman highlights that when the chemist was exposed in 2010 early nanoparticle safety research was just being published. After she had been sensitised, her employer’s occupational medicine consultant assured Goldman better control practices would be instituted. The clinician stresses that safety organisations and labs must keep workers safe despite incomplete knowledge. ‘Would this kind of worker be better protected today?’ she asks. ‘I’d put that to your readers – how are people in the chemical industry handling nanoparticles right now?’