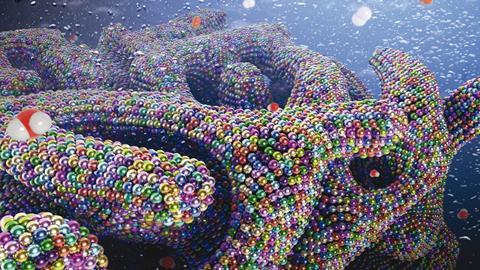 ‘The reported ultra-high-entropy alloy catalyst has a nearly equimolar composition for all the constituents,’ notes Wang. ‘Therefore, there is no distinction between primary and minor constituents anymore.’

High-entropy alloys composed of so many different elements are unusual, but Fujita says it is the high degree of synergy within these alloys that leads to their distinct properties, such as their ‘high configurational entropy, lattice distortion and sluggish diffusion’, as well as their potential applicability as omnipotent catalysts.

The nanoporous structure introduced by the dealloying process increases the surface area and the number of potential active sites within the alloys, improving their catalytic performance. Moreover, the distinct multimetallic composition of the alloys can facilitate charge transfer and the adsorption or desorption of various ions.

Fujita describes the 14-element composition as having a cocktail effect because mixing so many different chemical components alters their behaviour. ‘The cocktail effect does not come from the sum of the elements, but [from] the multiplication of elements. We know that the cocktail is always tasty not because of the sum of each element, but additional unexpected tastes from the combination of elements.’

The team evaluated the electrocatalytic performance of their nanoporous ultra-high-entropy alloys in the hydrogen evolution reaction and oxygen evolution reaction under acidic conditions. They showed excellent electrochemical stability, rapid electron transport and high reaction kinetics. Characterisation confirmed that the alloys mostly maintained their morphology and porous structure, even after spending 10 hours in an acidic environment.

While the catalytic performance of the nanoporous ultra-high-entropy alloys is largely attributed to the synergistic effects of the 14 elements, it is far too complex to define due to the numerous possible element combinations within the alloys.

Wang notes that while the study will ‘motivate the wider community to examine the broader application of ultra-high-entropy alloys’, questions about this synergistic effect and the underlying mechanism regarding the electrochemical stability remain.

And while Fujita’s team selected 14 major elements commonly used as catalysts for their nanoporous ultra-high-entropy alloys, it may be possible to use even more elements in the future. ‘Non-metals, [such as] sulfur or phosphorus, could technically be used and they might lead to unexpected sulfides or phosphides for catalysis,’ remarks Fujita. However, ‘the maximum possible number of constituent elements in high-entropy alloys … remains an open question.’