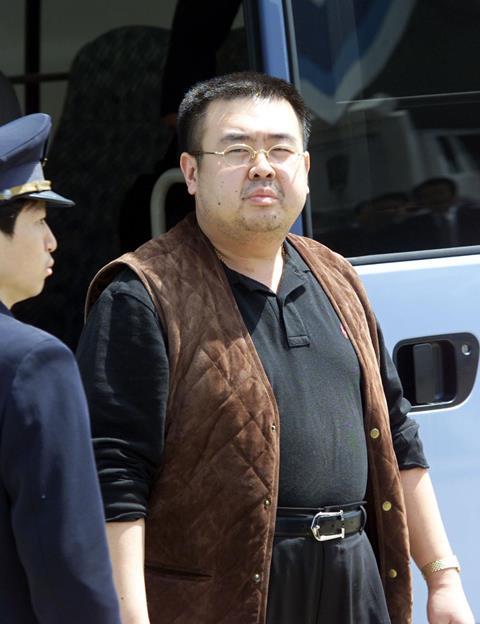 The lethal nerve agent VX has been revealed to be the murder weapon used to kill Kim Jong-nam, the estranged half-brother of North Korean leader Kim Jong-un. The victim was attacked from behind at Kuala Lumpur airport in Malaysia by two female assailants who smeared his face with a cloth. Kim Jong-nam sought help from officials, complaining of pain in his face and died following a seizure on the way to hospital.

Initial reports from the Malaysian authorities suggested that he had been pricked with at least one needle loaded with poison or sprayed in the face with a liquid. But this was not apparent in the grainy CCTV footage and attention quickly turned to what poison may have been to be so quick acting. Suggestions were made that some form of cyanide may have been used or more speculatively ricin. The media in Japan suggested tetrodotoxin as the agent.

However, the Malaysian authorities have now revealed that the nerve agent VX, ethyl ({2-[bis(propan-2-yl)amino]ethyl}sulfanyl)(methyl)phosphinate, a compound outlawed internationally under the Chemical Weapons Convention, was involved in the crime. VX is a yellowish, odourless and tasteless liquid that disrupts the body’s nervous system to lethal effect. Ten milligrams is enough to kill a person through skin contact although it can also kill through inhalation. One of the women involved in the attack subsequently fell ill too.

‘This nerve agent can penetrate the skin and it acts very quickly,’ explains chemist John Emsley, author of The elements of murder: a history of poison. ‘The toxic dose via the skin is 0.1mg per kg of body weight, although it’s only 5μg when inhaled, so I suspect the woman sprayed him in the face as well and had the antidote to hand.’

VX inhibits the enzyme acetylcholinesterase, blocking the breakdown of a neurotransmitter, ultimately leading to convulsions and death

However, a more sophisticated attack may have taken place. ‘I would be looking closely at, why two women?’ says John Robertson, a poisons expert who runs The poison garden website. ‘Is it possible that each had a different substance on their cloth and the two reacted on his face to produce the fatal toxin? That would explain how they could have handled the cloths with impunity.’ Now that we know the agent was VX, Robertson points out that this poison can be employed as a binary weapon. VX can be made by mixing O-(2-diisopropylaminoethyl) O′-ethyl methylphosphonite (Agent QL) with elemental sulfur (Agent NE) or a liquid dimethyl polysulfide mixture (Agent NM).

The Malaysian authorities made several arrests, while other suspects have fled. The primary suspect is a woman in her 20s holding a Vietnamese passport in the name of Doan Thi Huong. In a bizarre twist, she is thought to have been a contestant on the Vietnamese version of TV talent show Pop Idol in 2016 and her father has claimed that she is far too timid to have carried out the alleged attack. A second woman thought to be directly involved in the murder is also being held. It is thought that the women were directed by others and the Malaysian authorities are demanding an interview with a North Korean diplomat, Hyon Kwang Song, who is known to have been in the airport on the day of the assassination. North Korea is denying them access and has even claimed that there is a conspiracy between Malaysia and South Korea and that the victim may not be Kim Jong-nam.

Given that Malaysia is one of the few friends of North Korea the diplomatic meltdown resulting from this incident has caused concern, particularly given North Korean remarks on its nuclear capabilities in missives presented to the Malaysian authorities. Three suspects remain in custody and seven more people are wanted by the police.