Observing the life and death of a single excited-state molecule

Researchers have observed electrons jumping between different energy levels in an individual molecule, and how the jumps can be suppressed when the excess energy is transferred instead to a nearby oxygen molecule – a process called quenching.

By positioning the two molecules on a surface with atomic precision, the team could study how quenching is affected by their geometric arrangement. Such energy transfer between molecules is a fundamental process in chemistry and life, for example in photosynthesis. 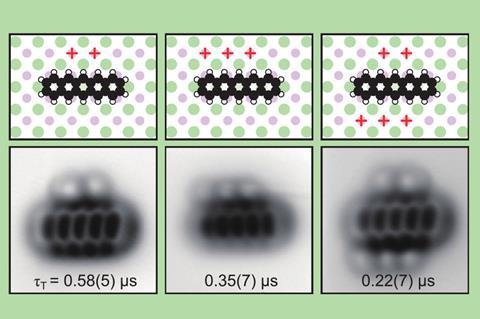 A team around Jascha Repp and Jinbo Peng at the University of Regensburg, Germany, collaborating with Leo Gross and colleagues at IBM’s research laboratories in Switzerland, used an atomic force microscope (AFM) to conduct spectroscopy of a single adsorbed molecule – pentacene, a chain of five fused benzene rings – adsorbed on the surface of a sodium chloride crystal. Instead of light, they used voltage pulses to excite and probe the electronic states.

In the molecule’s lowest-energy state, all of its electrons are paired, with opposite spins: this is a so-called singlet state. But if it is energetically excited, two of the highest-energy electrons can occupy different orbitals and then have the same spin. This is called a triplet state. Repp and colleagues looked at how the first excited triplet state decays to the singlet state for individual pentacene molecules.

An initial voltage pulse from a metal AFM tip held just above the molecule pumps energy into it, and subsequent pulses monitor which electronic state it is in at different times. From repeated runs on an individual molecule, the researchers could deduce the excited state’s average lifetime and decay rate. Their results agreed with single-molecule optical measurements made on dilute pentacene.

The researchers then investigated how a single oxygen molecule could quench pentacene’s excited state by absorbing its energy. Repp and colleagues used the AFM tip to drag or push an adsorbed oxygen molecule into different positions close to the pentacene, and measured how the triplet lifetime varied as this geometric arrangement was changed.

Repp says that being able to measure how the energy transfer depends on the molecules’ geometric arrangement has been all but impossible previously both experimentally and theoretically – in part because theoretical approaches are mainly designed for calculating ground-state properties only.

‘These experiments are impressive in their ability to link energy transfer kinetics with characterized structure, without requiring extensive synthetic chemistry to lock down molecular positions,’ says David Beratan at Duke University in Durham, US, an expert on energy harvesting and charge transport in biomolecular systems. ‘The appeal is that the geometry is measured directly.’

If such AFM manipulation of single molecules could be scaled up, says William Moerner of Stanford University in the US – who shared the 2014 chemistry Nobel prize for his work on single-molecule fluorescence microscopy – then ‘these methods might be useful for assembling geometric configurations of molecules for future applications’, for example in molecular optoelectronics.

Better knowledge of triplet quenching could help to develop molecular photonic devices, says nanophotonics expert David Andrews of the University of East Anglia, UK . ‘The formation of triplet states can sometimes be a nuisance, interfering with photophysical channels that are sought for applications,’ he says. ‘So any more sophisticated understanding of how to structure materials to optimise triplet quenching will undoubtedly be useful.’