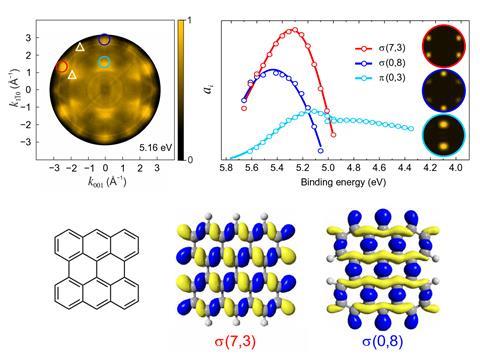 Experimentally-generated map of copper surface using photoemission orbital tomography (top left) and the projected densities of states of σ and π orbitals (top right). The bianthracene investigated in the study (bottom left) and maps of its σ orbitals (bottom middle, right)

A technique developed for imaging π orbitals during surface chemical reactions – photoemission orbital tomography – can also image σ orbitals as well. The researchers, who tested their discovery by answering a hitherto open question about the product of a reaction, believe the method could unravel chemical mechanisms in fields such as catalysis.

Surface chemistry is crucial to fields such as heterogeneous catalysis and microfluidics. To understand chemical structures, researchers often use scanning tunnelling microscopy (STM) to measure the depths of electrons’ potential wells. Unfortunately, this only works for very loosely bound electrons, which are usually in π orbitals, as applying too much voltage causes the junction between the tip and the surface to become unstable. However, other electrons are important in bonding too. ‘For example only σ orbitals are involved in bonding to hydrogen atoms, because the hydrogen atom has an s-like orbital that can only attach to a σ orbital,’ explains theoretical physicist Peter Puschnig at the University of Graz in Austria.

In 2009, Puschnig and colleagues unveiled an alternative to STM called photoemission orbital tomography. They irradiated a surface with ultraviolet light and measured both the angles and energies of electrons knocked out by the photoelectric effect. This allowed them to work out the momenta of electrons with different energies in molecules and thereby to reconstruct the shapes of electronic orbitals. Here too σ bonds posed a difficulty, however. Photoemission orbital tomography relies on the assumption that the electrons emitted from all the individual atomic orbitals in the surface sum to form plane waves at the detector. ‘One can mathematically prove that under certain assumptions it should work, but these mathematical assumptions cannot be applied to σ orbitals,’ says Puschnig. ‘So we made this cautious statement that it could only be applied to π orbitals.’

The researchers showed that, in practice, it appears to work for σ orbitals too. The on-surface dehalogenation and cyclodehydrogenation of a bianthracene on a copper substrate was performed to ascertain whether or not copper atoms were incorporated into the product. Working from the assumption that the plane wave approximation was valid, Puschnig and colleagues calculated the expected spectra in both cases. Experimentalists from Forschungszentrum Jülich in Germany then collected UV photoemission spectra at the German national metrology institute.

The spectra were much closer to the predictions for the product without copper atoms. This answered an unresolved question in surface science and also demonstrated that photoemission orbital tomography can detect σ orbitals. ‘We’re certainly not saying the plane-wave approximation works always and everywhere,’ says Forschungszentrum Jülich’s Serguei Soubatch, ‘we do observe some deviations, but on a conceptual level it perfectly describes the electronic structures of the objects we’ve studied so far.’

The researchers are now hoping to track reactions in real time. ‘If you can trace the change in the orbital structure [during a chemical reaction] as a function of time, of course you learn a lot about the details of the chemical reaction,’ says Forschungszentrum Jülich’s Frank Stefan Tautz, the work’s senior author. Soubatch believes the work is a practicable laboratory tool. ‘Nowadays photoemission spectroscopy is developing quite fast towards catalytic applications, and there is no reason why our work can’t be applied there with some particular improvements [to the apparatus],’ says Soubatch.

Johannes Voss of the Suncat Center for Interface Science and Catalysis at Stanford Linear Accelerator Laboratory is intrigued. ‘It’s not yet understood yet why it works for σ orbitals but I hope further experiments and also advances in photoemission simulations will help to clarify what requirements on the adsorbed system are necessary such that this very promising direct orbital imaging technique is possible,’ he says. ‘The spectroscopic efforts for heterogeneous catalysis at my lab are focused on x-ray core level techniques. I think this method still has to prove where it can be applied.’