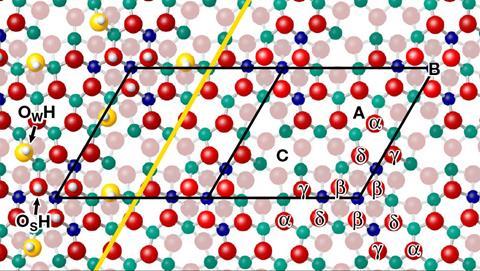 The acidity of single hydroxyl groups on a metal oxide surface has been determined for the first time using non-contact atomic force microscopy (AFM) and a hydroxyl-functionalised tip.1 With the new setup, researchers in Austria, Germany and the Czech Republic were able to directly assess the proton affinity of individual sites by probing the strength of their hydrogen bonds with the tip. ‘The indium oxide surface we investigated has four different oxygen atoms with different reactivity, which means we can study the proton affinity of four oxygen atoms in one experiment,’ says Margareta Wagner at TU Wien. She believes that this kind of experiment could one day be used to tailor the chemical reactivity of solids atom-by-atom.

Leo Gross, a scientist at the IBM Research Laboratory in Zurich, Switzerland, who was not involved in the study, says that proton affinity – a measure of the acidity of a system and a key quantity in many chemical reactions – is typically determined by characterising processes in which hydrogen is exchanged between reaction partners. ‘This is usually done in large ensembles of molecules, so it’s challenging to find out at which specific site on a surface the reaction of an individual species took place,’ he says. Wagner adds that surfaces are heterogeneous and that the way in which individual atoms are bonded to their neighbours influences their reactivity.

Using a high-resolution atomic force microscope with a modern qPlus sensor, the researchers have now been able to overcome these problems. They first exposed single crystals of indium oxide to small amounts of water vapour to adsorb OH groups and protons on the surface and then carried out AFM experiments in an ultra-high vacuum chamber at low temperature. Finally, they used theoretical models to quantify the proton affinities based on known values.

‘It’s a mechanical probing process at the atomic scale,’ explains Franz Giessibl from the University of Regensburg in Germany, who developed the qPlus sensor several years ago.2 ‘You basically grab a proton on a specific site with the left hand and an OH group with the right and check out how much they attract.’

Wagner explains that the AFM tip is placed above a proton on the surface and the force is measured as the tip approaches that proton. ‘The OH group of the tip and the oxygen atom of the surface compete for the proton,’ she says. ‘If the tip can interact strongly with the proton, that means that the bond between the proton and the surface oxygen atom is weak and the proton affinity of the latter is low. This also works the other way around: a weak interaction between the tip and the proton implies a high proton affinity of the surface oxygen atom.’ The new method has allowed the team to measure acidity at specific locations on an oxide surface and those experimental values tallied with theoretical calculations.

Pavel Jelínek from the Czech Academy of Sciences notes that this is a clever way to explore the chemical properties of individual atoms on surfaces. ‘Using this method, you can map the reactivity of the surface at the atomic scale,’ he says. ‘This is of indispensable value for any scientist interested in chemical reactions on surfaces.’ The approach also works for other oxides. The researchers say it can be used as a general tool to measure proton affinities atom-by-atom.