Researchers in the US have developed an atom transfer radical polymerisation (ATRP) process that is fully tolerant of oxygen. It will remove the need for specialised equipment and allow users to perform ATRP in both water and organic solvents in an open reaction vessel.

ATRP is one of the most widely used polymerisation methods as it can construct well-defined polymers, works with a broad range of monomers and solvents, and only requires inexpensive commercially-available catalysts, ligands and initiators. 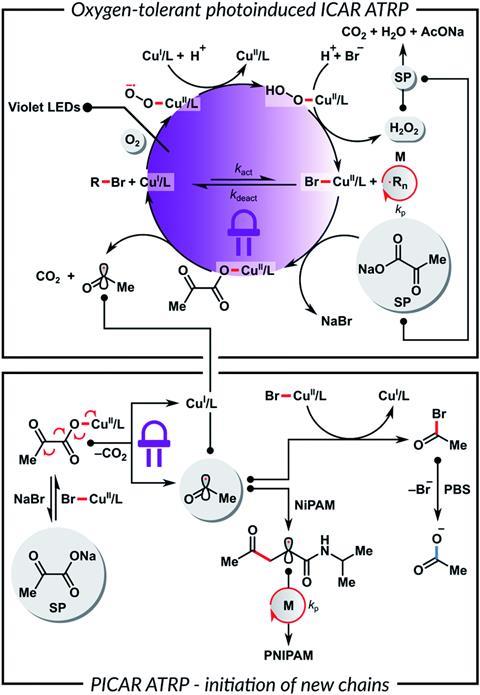 However, as with other radical polymerisations, the presence of oxygen, even in trace amounts, inhibits the ATRP process. In a typical copper catalyst system, oxygen converts the active form of the copper(I) catalyst to inactive copper(II). On top of that, oxygen reacts with the propagating radicals, which terminates the polymerisation.

Given the abundance of oxygen in the air this causes practical problems, so ATRP reactions are usually run in a glovebox or have the oxygen removed by flushing with inert gas or freeze–pump–thaw degassing. Unfortunately, these countermeasures tend to be incompatible with hybrid biomacromolecules such as those made with proteins or enzymes.

Over the past couple of decades, several groups of scientists have therefore tried to introduce a degree of oxygen tolerance to ATRP through various methods. Some of these use metals or small organic molecules as reducing agents, whereas others use photochemistry to regenerate the catalyst. However, these are still limited to sealed vessels with only a small amount of oxygen in the system.

Krzysztof Matyjaszewski of Carnegie Mellon University developed ATRP over 25 years ago. More recently, he developed a process known as breathing ATRP with his team by incorporating glucose oxidase as an oxygen scavenger. Nevertheless, this generates hydrogen peroxide, which ultimately produces hydroxyl radicals that initiate new polymer chains and result in decreased molecular weights. To overcome this, they tried adding sodium pyruvate to scavenge the hydrogen peroxide. Yet, there were issues with separating the enzyme from the product.

Now, Matyjaszewski and his co-workers have conquered the problem by doing away with enzymes and using photoinduced initiators for continuous activator regeneration (PICAR). Sodium pyruvate is added to regenerate the catalyst and to scavenge hydrogen peroxide. The method allows nearly total conversion of monomers to give polymers of a molar mass of nearly 300,000 and low dispersity while only using part per million concentrations of copper.

Yusuf Yagci from the Istanbul Technical University in Turkey has also tried to address the intolerance of ATRP to oxygen. He says the new method has several advantages, ‘including the use of a very low amount of copper catalyst, applicability in both aqueous and organic medium using hydrophilic and hydrophobic monomers and overcoming the problems associated with contamination of glucose oxidase observed with the enzymatic systems.’ ‘Although the system is complex, it will certainly receive interest from both the scientific and industrial communities.’

Matyjaszewski’s team is now working to further optimise the system. ‘We cannot, at least yet, reach masses of a million molar, and eventually we would like to switch from UV to visible light or maybe even near-IR, which has a much bigger penetration.’