Perovskite photovoltaics get their groove on 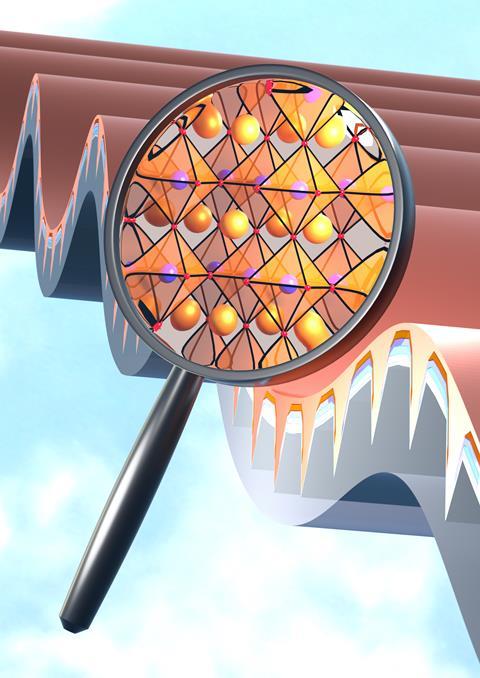 By coating opposing walls of micro-grooves with different electrical contacts, and then filling the groove with a solar ink, scientists have made a new type of back-contact solar cell

Back-contact solar cells have an active layer directly exposed to the illumination source, reducing parasitic absorption and reflection losses. This architecture also allows the cells to feature non-transparent, yet highly conductive, metal electrodes. Previously, back-contact perovskite solar cells could only be made using time-consuming patterning techniques such as electrodeposition. Now, David Lidzey and co-workers at the University of Sheffield, UK, in collaboration with the company Power Roll, have designed interdigitated back-contact cells that are much simpler to build. The cells are paper-thin, lightweight and free from rare earth metals, and the team connected them to create micro-modules – the first time that researchers have arranged back-contact perovskite solar cells in such a way.

The fabrication process has several steps. First, the team embossed V-shaped micron-width grooves into a polymeric substrate. They deposited different, evaporable charge-selective contact materials onto opposing walls of the grooves by rotating the substrates, and then filled the grooves with perovskite via spin coating, forming devices with the multilayer structure Ti/C60/CH3NH3PbI3/NiO/Ni. Less than 2 microns separate the device contacts: ‘This spacing helps reduce electrical losses within the device due to charge–carrier recombination,’ explains Lidzey.

The devices had a maximum power conversion efficiency of over 7%, a record for interdigitated back-contact perovskite solar cells. Lidzey says the ease of interconnection between adjacent grooves is one of the really big benefits of the devices. ‘We have recently made larger modules, containing multiple cascades of grooves, with around 3000 grooves patterned over an area of around 4cm2.’ The team next aim to produce multiple device cascades over a 100cm2 area, and to explore different perovskite formulations to boost the cells’ stability amongst other improvements. 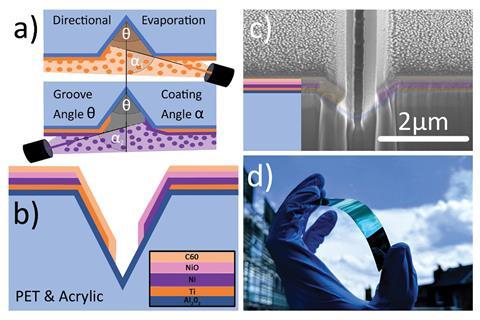 (a) Directional evaporation onto a groove creates selective electrodes on opposing walls. (b) The groove is coated with Al2O3 followed by an n-type titanium and C60 electrode on one wall and a p-type Ni and NiO electrode on the opposite wall (c) A focussed ion beam-scanning electron microscope image of a cross-section through a single groove. (d) The structures are very flexible

‘Among the many advantages of this configuration is the possibility to eliminate one of the most expensive components of a perovskite solar cell, the transparent conducting oxide electrode,’ comments Mónica Lira-Cantú, a solar cell expert at the Catalan Institute of Nanoscience and Nanotechnology, Spain. She envisages that this architecture ‘will impact the development of perovskite solar cells in novel applications where the use of the transparent conducting electrode is not always favourable, or on special substrates which don’t facilitate the fabrication of smooth and pinhole-free thin films, for example, in wearables or for the internet of things.’