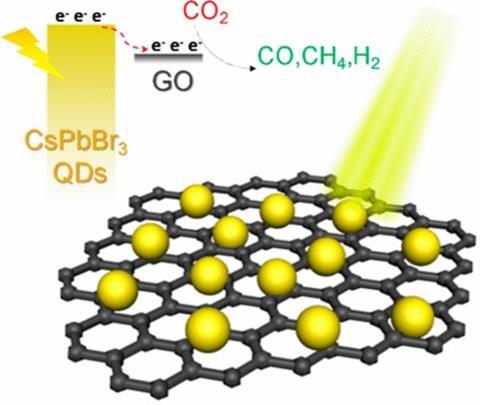 ‘Halide perovskites […] achieved an amazing efficiency of 22.1% in a few years. Inspired by such rapid development, […] we thought the same materials could be competent for high-performance photocatalysis,’ explains Dai-Bin Kuang of Sun Yat-Sen University in Guangzhou.

Kuang and colleagues prepared quantum dots – semiconductor nanoparticles – of a highly stable cesium–lead halide perovskite, as well as a composite material made of these quantum dots and graphene oxide. Both materials showed an efficient absorption of visible light and strong luminescence. The team used these products to achieve a fundamental step in artificial photosynthesis – the reduction of CO2. To simulate sunlight, they used a xenon lamp with an appropriate filter.

Perovskite quantum dot photocatalysts surpassed the efficiency of cadmium sulfide and other state-of-the-art materials in the conversion of CO2 to carbon monoxide and methane. Chemists also demonstrated the synergetic effect of the composite – when combined to graphene oxide, perovskite QDs achieved photocatalytic performances 26% higher than QDs alone. According to Kuang, graphene oxide boosts the efficiency of the QDs ‘improving the charge separation and transportation.’

Emilio Palomares, an expert in solar cells working at the Institute of Chemical Research of Catalonia, Spain, says: ‘Kuang’s idea is brilliant, they go beyond the classic uses of perovskites and develop a whole new application.’ He adds that the combination of quantum dots with graphene oxide is a good choice. ‘Together, these two materials separate charges for a longer time, thus favouring catalytic mechanisms.’ He predicts that ‘researchers will soon come up with new synergies to enhance the power of quantum dots’.

Kuang says he and his co-workers are already testing alternatives to graphene oxide. ‘Support materials have great influence on the charge transport behaviour and the light harvesting efficiency of the photocatalyst. […] We have [also] used carbon based materials – like carbon nanotubes – and metal oxides – like TiO2 – to create a series of newly designed composite photocatalysts,’ he says.

Although very efficient, most halide perovskites have a major drawback – lead contamination. ‘The environmental concerns on lead halide perovskites are unquestionable,’ Kuang remarks. His team is testing the properties of lead-free alternatives bearing cesium, silver and bismuth. ‘Fortunately, we screened some ideal candidates,’ he says. ‘And we are currently investigating their potential photocatalytic applications.’