Photochemistry can be used to separate plutonium and uranium, new research shows. By showing that photochemistry can replace harsh redox agents during actinide separations, the work could benefit nuclear processing facilities and environmental remediation efforts.

The redox chemistry of the actinides plays a vital role in the chemistry of separating them. The near overlapping energies of the 6d and 5f orbitals in the early actinides allows for selective tuning of actinide oxidation states. In aqueous separations, the tendency of the actinides with varying oxidation states to form either anionic or neutral complexes with donor ligands can be used to achieve high separation factors.

Traditional industrial separations methods such as the plutonium uranium recovery by extraction (Purex) process rely on redox agents to exploit the unique electrochemistry of uranium, plutonium and neptunium. Chemical complexing agents are then used to bind to the actinides in particular electrochemical states, thus allowing for their separation. This process, however, requires the long-term storage of a raffinate in deep geological repositories following the separation. Moreover, redox reagents such as hydrazine and nitrous acid can, under specific operation conditions, be potentially explosive. As such, research efforts are being directed towards alternative separation methods. 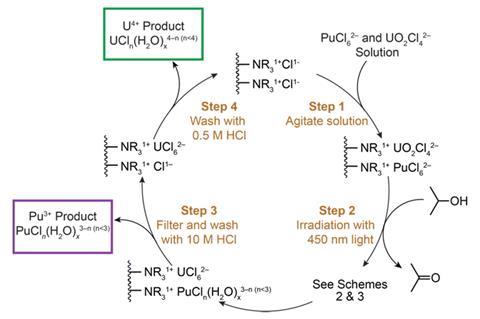 Pu4+(aq) and UO22+(aq) undergo photoreduction to Pu3+(aq) and U4+(aq) in HCl(aq) in the presence of 2-propanol. This oxidation state adjustment is compatible with ion-exchange chromatography

In recent years, uranium photochemistry has become more sophisticated. Research has demonstrated that ultraviolet and visible (UV–vis) light can tune uranium’s oxidation states. In addition to such work on uranium, a small number of studies suggest that it should be possible to separate actinides using photochemistry.

Inspired by such work, a team around Stosh Kozimor and Benjamin Stein at Los Alamos National Laboratory (LANL), US, has proposed a photochemical method for separating plutonium from uranium. Using UV-vis light, the researchers showed they could induce Pu4+ and U6+ to become Pu3+ and U4+, respectively. This then allowed the team to perform more traditional separations methods, including anion exchange chromatography, to arrive at pure products.

‘I was really excited to read that Stein and Kozimor have developed light-induced redox reactions for this type of separation, since the use of energy-efficient LEDs to photoexcite metal complexes has had such a pronounced effect on catalysis in recent years,’ comments Polly Arnold, director of the chemical sciences division at the Lawrence Berkely National Laboratory in the US.

‘Future work to get light into a larger scale separation process may well be able to piggyback on the work being done by the catalysis community to scale up their light-assisted reactions,’ says Arnold. ‘In the meantime, it is exciting to consider how we could use these cheap, blue LEDs to help reprocess our small and valuable stocks of rare isotopes that we need for research.’