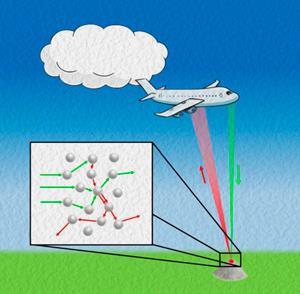 US scientists have pushed the range at which chemicals can be remotely identified beyond a kilometre by turning the samples themselves into lasers.1 By triggering bright random Raman laser emission, Marlan Scully and Vladislav Yakovlev from Texas A&M University and their team successfully distinguished a series of similar white powders. The system they used cost just $25,000 (£15,000).

‘Even this preliminary proof-of-principle experiment easily outperforms existing techniques in both range and acquisition distance,’ Yakovlev tells Chemistry World.  The approach could enable airborne instruments that measure fertiliser use or spot pollution or explosives, Scully adds.

Analytical chemistry already exploits Raman scattering, where molecules absorb photons and retain part of their energy, therefore emitting a different colour photon. The colour difference can yield valuable information about the material, if a fundamental challenge can be overcome. ‘Only one photon in 10-10 is Raman scattered, so you’ve got to enhance the effect,’ Scully says.

Normal lasers trap photons between mirrors to trigger stimulated emission of photons, multiplying them and leading to powerful light beams. Random lasers have no mirrors, instead shining pump lasers at materials that scatter light, triggering stimulated emission through frantic ‘optical pinball’, with photons bouncing in all directions.

Yakovlev realised that if any of the ‘pinball’ photons had been produced by Raman scattering, a random laser would amplify them too. This makes the production of Raman-scattered photons 100 million times more efficient, he says. His team first proved that by shining a green laser on barium sulfate powder. The powder emitted intense random laser light in all directions, mixing red Raman and green conventional stimulated emissions.

In their latest work, the scientists added a red laser to help collect the detailed Raman information, allowing them to distinguish six inorganic and three organic powders. ‘The green beam is diminished in energy and the red beam enhanced by the Raman transfer of photons,’ Scully explains.

Bernhard Lendl from the Vienna University of Technology in Austria says the technique ‘may well open a new avenue for identification of trace materials at large distances’. ‘It adds potential high sensitivity to the inherent molecular specificity of Raman spectroscopy,’ he says. However, he warns that the technique’s eye safety ‘will require special attention’.