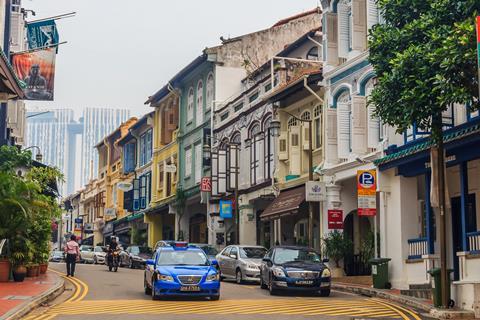 16 June 2013: Smog in the air around Club Street, Singapore, caused by the burning of palm plantations in Indonesia 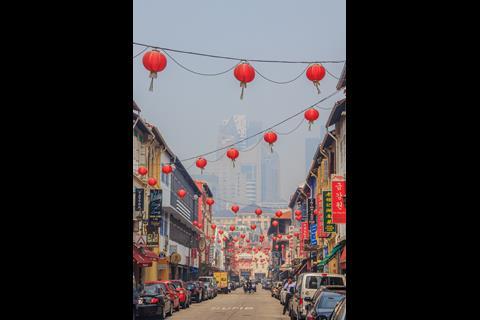 16 June 2013: Smog in the air around Chinatown, Singapore, caused by the burning of palm plantations in Indonesia 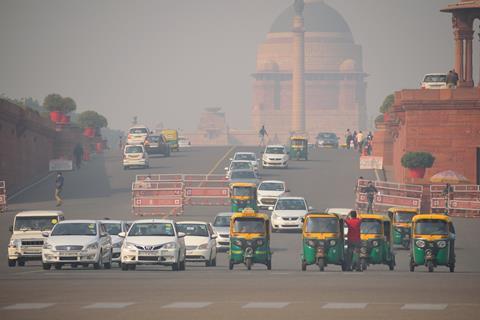 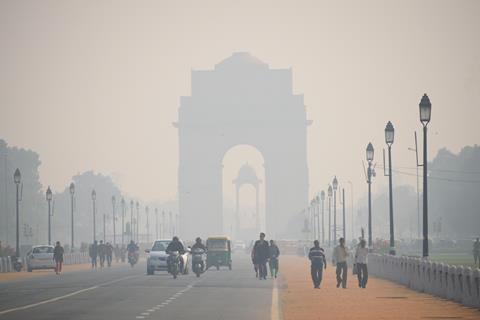 Urban haze is limiting the amount of energy produced by photovoltaic devices in cities, new analysis shows, giving inaccurate results for both researchers and manufacturers.

In 2013, Marius Peters from the Massachusetts Institute of Technology, US, and colleagues witnessed uncharacteristically extreme air pollution whilst in Singapore. ‘I was flying into Changi airport and there was a dense cloud cover over the island, and what was unusual was that these clouds were hanging very low. That was because they were, in fact, smoke,’ comments Peters. ‘The most severe part of this event lasted maybe two weeks, and during this period the haze was so strong that you could not see the building on the opposite side of the street. It was the first time I experienced something like this, and it made a deep impression.’

This experience led Peters and his colleagues to question the effect of atmospheric pollution on the photovoltaic efficiency of solar cells in urban environments. Using Delhi as an example, they correlated haze particles to a loss in the amount of sunlight reaching solar cells. For every 100 µg/m3 of fine particulate matter, up to 12% of the incoming sunlight failed to reach the ground, which over a year results in 11.5% of the incident sunlight never reaching the Earth’s surface. Using this analysis, the group produced preliminary estimates of the relative sunlight loss due to urban haze for other cities worldwide, including London and Los Angeles, with results ranging from 2.0% in Singapore to 9.6% in Kolkata.

Urban haze consists of micrometre sized particles below 2.5µm that enter the atmosphere from incomplete combustion processes; cars, cooking stoves and heating all contribute. Although the particles are too small to see with the naked eye, they do interact with light in two ways: absorption and scattering. In absorption, a photon of light is converted into heat when it interacts with the surface of a haze particle, consequently ending the photon’s journey to the earth’s surface. Alternatively, in scattering, a ray of light is altered from its original course with photons diverted away from the Earth’s surface. Urban haze then acts like a smokescreen, preventing light from passing through it to the ground and solar cells in the city below.

Despite this sizable effect, air pollution is largely disregarded by solar cell researchers and manufacturers alike. Although urban haze does not inhibit solar cell efficiencies, it does limit the number of photons available, which consequently limits the overall energy output. For solar cell manufacturers, predicting the energy output is vital for financial projections and the viability of solar cell technologies. With these findings manufacturers could more accurately predict photovoltaic outputs and consequently improve the reliability and commercialisation of such systems. 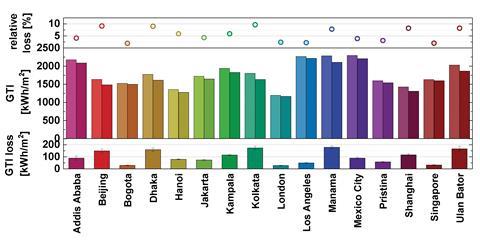 Peters also hopes the findings will drive research towards better photovoltaic technologies to replace the energy sources that produce urban haze, such as fossil fuel combustion. ‘Solar cells are a victim of air pollution, but they also provide a possible solution. Many of the processes that produce haze can be replaced by less polluting renewably powered ones. Especially relevant are electric vehicles and solar powered cookers.’

Sergio Castellanos, an expert in photovoltaic technology and economics at the University of California, Berkeley, in the US, also holds this view. ‘The challenges associated with urban haze degrading energy yield can represent opportunities for different research directions: from passive and active coatings at the module level to control and minimize the adhesion of fine particles, predictive energy yield modelling to account for degraded air quality, and optimizing PV module cleaning approaches.’