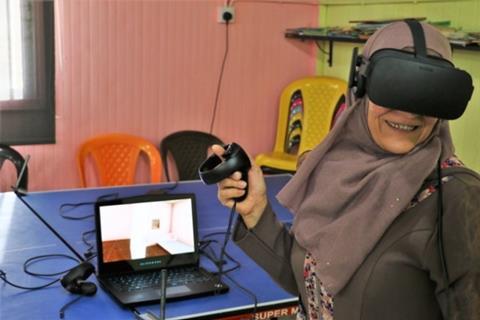 Overall winner of the EPSRC science photo competition. As part of a participatory design workshop, refugees in Azraq and Zaatari refugee camps in Jordan used virtual reality to offer feedback and adapt suggested shelter typologies. Participatory design is a two-way process which allow refugees to be part of the research team. 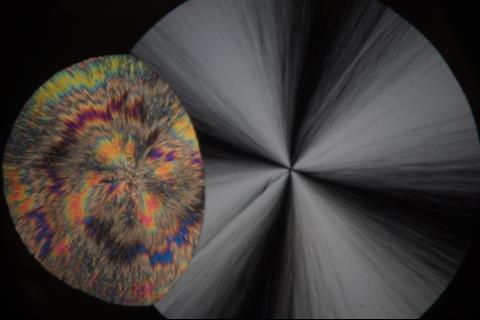 The moment that a mysterious, colourful and disordered new crystal form was discovered (left), alongside the known crystal (right). Previously only shadows of this triphenyl phosphite crystal have been hinted at from x-rays and melting points. The image was taken using a polarisation microscope, where only crystals which twist light are visible. 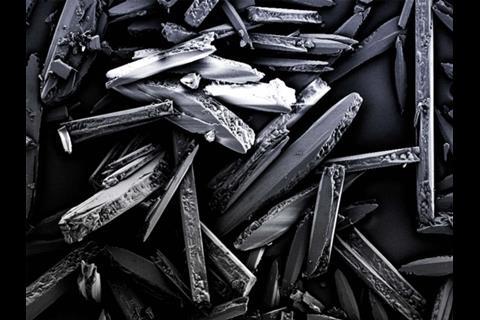 Lovastatin is widely used for the treatment of hypercholesterolaemia, but the crystalline form of elongated needles is notorious for its poor manufacturability of the final drug product. The aspect ratio of these needle-shaped crystals can be modified by a polymer additive, polypropylene glycol (PPG), which acts as growth blocking agent on selected crystal faces. The fastest growth path along the [100] direction is suppressed while the [010] direction indicating distinctively growth gives spindle body shape. The images show that growth from solution is disrupted on some surfaces resulting in an uneven microstructure, whilst growth on other planes remain relatively flat. Further shape modifications may be obtained using temperature cycles of crystal growth and dissolution, which overall inhibit growth along the a-axis, [100], but with minimal agglomeration and production of fines, leading to a better product for downstream formulation. 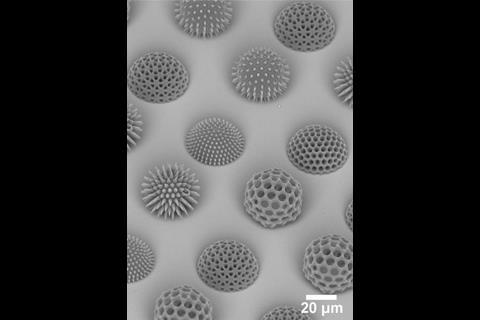 This image shows various polymeric micro-sized balls fabricated by two-photon lithography based 3D printing technology. The diameter of each ball is 40 μm, roughly less than half of the diameter of human hair. The smallest feature size shown here is roughly 100 nm. The balls were designed by Mr Joseph White and fabricated by Dr Qin Hu. This image demonstrates that two-photon lithography is a powerful 3D printing tool for fabricating arbitrary 3D micro/nano structures. The image was captured using Hitachi desktop Scanning Electron Microscopy (SEM) on a tilted stage, with a magnification of 800 times. 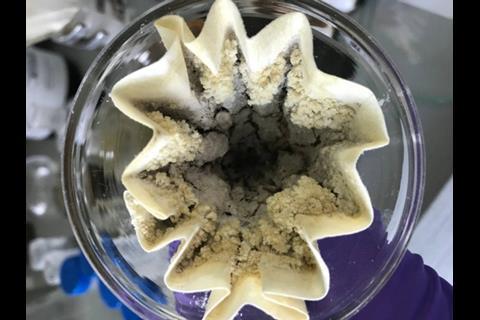 This photo shows the fractionation of fat, oil and grease (FOG) deposits using an organic solvent. The residues on the filter paper represent non-lipid constituents of a fatberg. Deposition and accumulation of FOGs in sewers, released by food establishments, are causing increasing problems in the water sector. Massive deposits of saponified FOGs congealed with non-flushable products, called fatbergs, are the cause of blockages, sewer overflows and properties flooding. Mechanical removal and maintenance of FOG-blocked sewers costs between £15 million and £50 million each year and presents a high risk to public health and the environment. The Cranfield University team wanted to establish how deposits form in the sewer network and how they can be effectively degraded and inhibited with bioaugmentation products. Investigation of exactly what FOG deposits are made up of, as shown in the photograph, provides new insight into the formation of fatbergs. 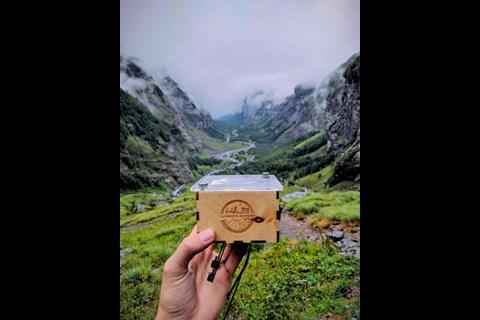 This sensor was part of a citizen science initiative, called Cambike Sensor, on measuring the air pollution that cyclists are subjected to on a day-to-day basis around Cambridge. The aim of the project was to engage members of the public with the technology and science behind measuring air pollution, and how easy it can be for anyone at home to get involved. 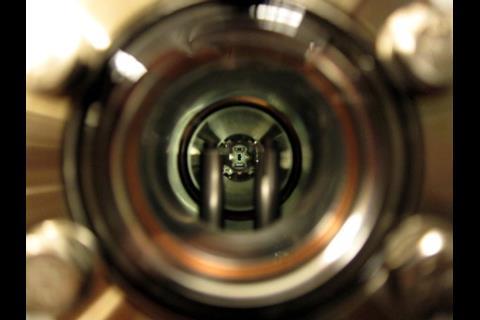 A view down the length of a vacuum chamber that will hold single trapped diatomic molecules assembled from individual atoms. Four electrodes traverse the length of the chamber, which will provide an electric field to orient the molecules. These molecules will be used to test out quantum logic operations for future quantum computers. 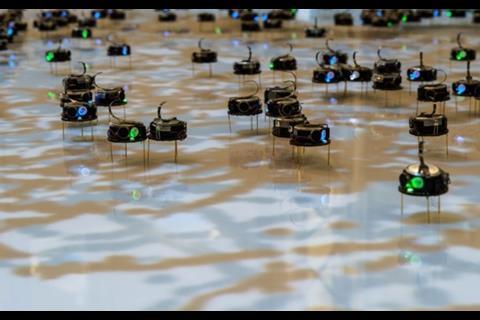 In the future, large groups or ‘swarms’ of robots could be deployed to work on tasks like monitoring the environment for pollution, cultivating crops, or at the nanoscale, delivering drugs to tumours. The research team drew inspiration from social insects like ants to enhance swarm efficiency. Ants lay pheromones on the ground to communicate indirectly with each other. One behaviour is laying a territory-marking pheromone, so that other ants know the area has already been explored. Here, a virtual pheromone trail has been laid using a projector, behind Kilobot (1000-robots) explorers as they randomly move around. Red marks fresh pheromone, cyan where it has ‘evaporated’. When the robots are programmed to avoid the pheromone, the group as a whole explores more of the arena more quickly. Tiny, light-sensitive robots could be manipulated under the microscope in such a way in future nanomedicine. 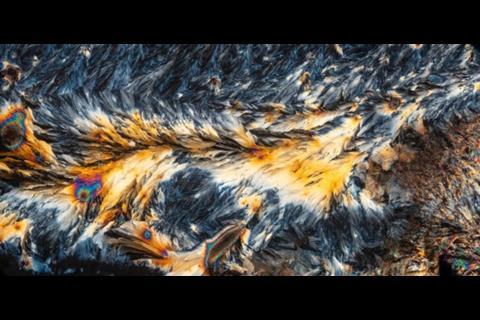 This photograph shows the surface of paracetamol grown onto a glass slide from solvent. It was imaged using polarised light to give the different colours.

The competition, which was open to researchers who received EPSRC funding, attracted 169 entries in five categories.

A colourful photo of a new triphenyl phosphite polymorph under polarised light, won Finlay Walton from the University of Glasgow first prize in the eureka and discovery category. Runner-up in the same category is chemical engineer Wei Li, from Loughborough University, with her image of lovastatin. Li used additives and temperature gradients to crystallise the cholesterol-reducing drug in a more uniform manner.

Qin Hu from the University of Nottingham scooped the innovation category award with her image of polymer balls half the width of a human hair. The balls’ intricate shapes were made by two-photon lithography, a 3D printing technique that can produced micro-sized objects.

The equipment and facilities prize was awarded to Peter Pedersen from the University of Cambridge for showing off his air pollution sensor in the scenic settings of the Alps. He originally developed the sensor as part of a citizen science project to measure cyclists’ exposure to pollutants while commuting in Cambridge.

Cranfield University’s biotechnologist Natalia Jawiarczyk won in the weird and wonderful category. Her photo of fatberg crystals was shot during her research on how these sewer-blocking deposits form and how they can be removed.

The overall winner, chosen by four judges from the EPSRC, the Royal Academy of Engineering and Press Association, shows a Syrian refugee using virtual reality to explore and improve a new shelter design. Dima Albadra from the University of Bath took the photo during a workshop at refugee camp in Jordan.