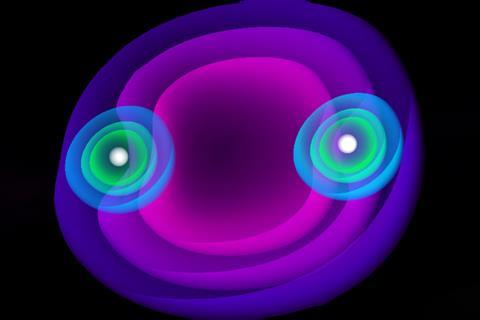 Scientists have discovered a new series of electronically stable molecules that are bound by a positronic covalent bond.1 Using calculations, they show that a single positron can hold two halide anions together.

The molecules that we observe in nature are made of matter, typically held together by covalent bonds created by atoms sharing electrons. Now, researchers led by Andrés Reyes from the National University of Colombia have shown that it should be possible to form stable homo- and heteronuclear molecules from two halide anions (F–, Cl–, Br–) by using a single positron to bind them together. A positron (e+) is the antimatter equivalent of an electron; they have the same mass but opposite charges and annihilate upon collision, ceasing to exist and releasing energy. The concept of a positronic covalent bond is simple; it is equivalent to an electronic half bond but uses a positron instead of an electron. ‘We can take atoms and combine them to form molecules, but this time the bonds that keep them together are not made of electrons, but of positrons’, explains Reyes.

This new type of species, made of matter held together using an antimatter bond, builds on the scientists’ recent research on the more simple hydride equivalent, e+[H–H–].2 Not all pairs of anions can form a stable positronic bond and it isn’t clear what determines whether they will. However, the scientists have found evidence that the dihalide systems are stable. Using simulations to calculate the energy of the molecular species bound by a positron, as well as the energy of the potential reaction channels that lead to the molecule breaking apart, the researchers show that it is more energetically favourable for the positronic bonds to remain intact.

‘There has been work on the chemical bond between a positron and two hydride anions, but the present study is more chemical as it now makes it possible to compare different positron bonds,’ comments Gernot Frenking, a theoretical chemist at the Philipps University of Marburg in Germany. ‘[It is] exciting and stimulating because it expands our knowledge of covalent bonds between two particles beyond classical chemical bonds.’

The scientists compare these species to ones with regular electronic bonds and show that the homo- and heteronuclear bonds and properties are similar to one-electron bonds between alkali metal cations. ‘It is regular chemistry, but with positrons,’ says Reyes. ‘If you look at the orbitals they look exactly the same; that’s why we were so excited by this.’ 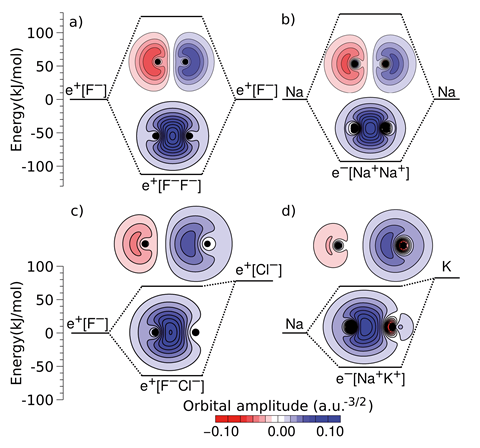 The calculations show that the systems are theoretically stable and, although they will only exist until the positron annihilates, Reyes hopes experimental chemists can find them. ‘We invite people to do experiments to observe this exotic type of matter–antimatter species,’ says Reyes.

‘Proving that positron dihalides are stable is clearly stunning, however, can we really talk of covalent bonding in these positron bound dianionic systems?’ asks Carlo Gatti, who studies chemical bonding using theoretical modelling at the Institute of Molecular Science and Technologies in Milan, Italy.

‘Despite positron accumulation in the inter-nuclear region, bonding turns out to be dominated by electrostatics rather than by exchange. We will really talk of covalency in its entirety when a study of a system with at least two positrons is afforded, where substantial positron pairing should eventually occur,’ adds Gatti. This is a goal that the researchers are working towards; identifying systems bound by two positrons, the antimatter equivalent of a regular electronic single bond.