We choose to go to the muon

Subatomic sorties have uncovered strange new species, says Philip Ball. Should we give these alien atoms a place at the table?

The periodic table seems constantly on the verge of expansion. There are of course new superheavy elements being added, literally atom by atom, to its nether reaches by the accelerator-driven synthesis of new nuclei. There’s also talk of systematic organisation of new pseudo-atomic building blocks, whether these are polyatomic ‘superatoms’1 or nanoparticles assigned a particular ‘valence’ via DNA-based linkers.2 But one could be forgiven for assuming that the main body of the table that adorns all chemistry lecture theatres will remain largely unchanged, give or take a few arguments over where to put hydrogen. 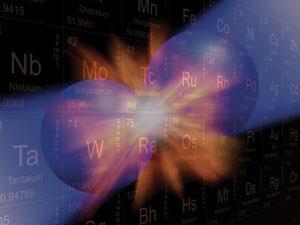 Yet even that can’t be taken for granted. A preprint3 by quantum chemists Mohammad Goli and Shant Shahbazian at Shahid Beheshti University in Iran posits two new light elements – although these should formally be considered isotopes. They are muonium (Mu), in which an electron orbits a positively charged muon (µ+), and muonic helium (Heµ), in which an electron orbits a ‘nucleus’ consisting of an alpha particle and a negative muon – the latter in a very tight orbit close to the true nucleus.

These ‘atoms’ can be considered analogues of hydrogen, with a single electron orbiting a nucleus of charge +1. However, they have quite different masses. The muon (a ‘heavy’ cousin of the electron, or of its antiparticle the positron) has a mass of 0.11amu, so muonium has about a tenth the mass of 1H, while muonic helium has a mass of 4.11amu.

Both atoms have been made in particle accelerators – where high-energy collisions generate muons, which can then be captured by a helium atom or can themselves capture an electron.

Some of these facilities, such as the Triumf accelerator in Vancouver, Canada, produce beams of muons that, through energy-reducing collisions with a gas, give muonic atoms with energies low enough to undergo chemical reactions. True, the muons last for only around 2.2×10-6 seconds, but that’s a lifetime, so to speak, compared with some superheavy artificial elements. Indeed, the chemistry of these muonic atoms has been explored already: their reaction rates with molecular hydrogen not only confirm their hydrogen-like behaviour, but show isotope effects that are consistent with quantum-chemical theory.4

So undoubtedly Mu and Heµ have chemistry. It seems only reasonable, in that case, to find a place for them in the periodic table. Dick Zare of Stanford University, who probably knows more about the classic H+H2 reaction than anyone else, is said to have once commented that if muonium was given a place in the table then it would be much better known.

But do these exotic atoms truly behave like other atoms when they form molecules? Are they still basically hydrogen-like, despite the fact that, for example, Mu is so light? After all, conventional quantum-chemical methods rely on the very different masses of electrons and nuclei to separate out the electronic and nuclear degrees of freedom (via the Born–Oppenheimer approximation). Might the muons perhaps ‘leak’ into other atoms, compromising their own atom-like identity?

To explore these questions, Goli and Shahbazian have carried out calculations to look at the electronic configurations of Mu and Heµ compounds using the quantum theory of atoms in molecules formalism, which classifies chemical bonding according to the topology of the electron density distribution. Their recent extension of this theory treats both nuclei and electrons as quantum waves, and so is well placed to relax the Born–Oppenheimer approximation.5

Goli and Shahbazian have calculated the electronic structures for all the various diatomic permutations of Mu and Heµ with the three conventional isotopes of hydrogen. They find that in all cases the muon-containing species exist within an ‘atomic basin’ containing only a single positively charged particle – that is, they look like real nuclei, and don’t contaminate the other atoms in the union with any ‘sprinkling of muon’. What’s more, Mu and Heµ fit within the trend observed for hydrogen isotopes: the atom’s electronegativity increases with its mass. This is particularly the case for Mu–H molecules, which are decidedly polar: Mud+–Hd-. That in itself forces the issue of whether Mu is really like light hydrogen or needs its own slot in the periodic table: Goli and Shahbazian raise the latter as an option.

The zoo of fundamental particles might provide yet more opportunities for making bizarre atoms. Goli and Shahbazian suggest as candidate constituents the positive and negative pions. But that will stretch experimentalists to the limit: their mean lifetime is just 26ns. Still more exotic would be entire nuclei made of antimatter or containing strange quarks (‘strange matter’).6 At any rate, it seems clear that there are more things in heaven and earth than are dreamed of in your periodic table.