Research by an international group of scientists provides evidence of covalent, dative and ionic character in one bond. Somewhat unifying a long-running bonding debate on the nature of bonding in a class of molecules called carbones, previously described as purely dative, the work suggests bonding in carbones sits somewhere between electron sharing bonds and dative bonds. The researchers say this provides a new distinction between coordinative bonding to carbon in the molecules studied and the more traditional coordination chemistry of transition metals and their ligands, which form purely dative bonds.

Most will be familiar with carbon using its four valence electrons to form covalent bonds in its ubiquitous tetravalent form. Carbenes (CR2) contain a carbon with a valence of two and retain two unshared valence electrons in a σ‐type lone‐pair orbital. Carbones are another class of molecules containing divalent carbon (0). Instead of sharing its electrons, the carbon atom retains two lone pairs and bonds with two ligands through donor–acceptor interactions. This contrasts with carbene molecules, which have electron sharing bonds and exhibit different chemical reactivity. 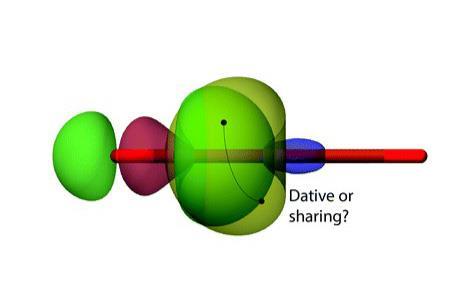 Some of the first carbones to interest chemists were carbodiphosphoranes as they exhibit an unusual property called triboluminescence, where light is emitted when the material experiences mechanical stimulation such as friction or impact. They are also unusually strong Lewis bases. Carbene bonding couldn’t explain these properties and earlier studies attributed them to dative bonding. Now, new work from Remco Havenith at the University of Groningen in the Netherlands and co-workers suggests this is not the full story.

Havenith and his colleagues used valence bond theory to probe the chemical bonding in several carbones, and compared the results to those for an allene with electron sharing bonds and a gold complex with dative bonds. The carbone molecules they studied actually sat between covalent and dative bonding, with components of both, having varying amounts of carbone character.

‘What some people call molecular monsters or edge cases, like a carbone or an allene or cubane, help us understand what the limits are on our models of molecular behavior,’ comments Michelle Francl, a computational chemist from Bryn Mawr College in the US.

The team studied the OC–C bond in carbon suboxide and related allene compounds using the valence bond method. The OC–C bonds in 1 and 3 were found to be distinct from ’normal’ electron sharing bonds and from dative bonding

‘It is customary to sketch molecular structures with ingeniously simple Lewis formula, but the actual bonding situation in molecules is much more complicated,’ comments theoretical chemist Gernot Frenking from Philipps-University Marburg, Germany, who carried out some of the pioneering work on carbones. ‘Chemical substances consist of only about 100 atoms, and the complex variety of millions of compounds results from the various combinations due to the chemical bonds between the atoms. The work by Havenith and co-workers demonstrates the insight gained by using modern methods of quantum chemistry for analysing the chemical bond.’

The chemical bond has not one nature but many natures

Havenith and his colleagues say valence bond theory can provide a picture closer to that of traditional Lewis structures than molecular orbital theory can. Through valence bond calculations the researchers assessed the importance of each possible valence bond structure for the allene molecule, three carbones and a gold complex containing dative bonds. The scientists also performed energy decomposition analyses investigating the orbital interaction energies for each molecule, finding that the carbones had orbital interaction energies between the two extreme cases. They conclude that unlike what was previously thought, bonding in these molecules is not purely dative.

‘This study really reminds us that when describing the bonding in a molecule there are multiple ways to construct and interpret the bonding. The chemical bond has not one nature but many natures, no apologies to Pauling, who I think would agree,’ says Francl.

Francl also notes the question of bonding character may not be answered yet: ‘I’m not sure that this will end the debate about carbone bonding, because bonds are not really an observable, but a chemist’s way of organising the information in a molecular wave function.’