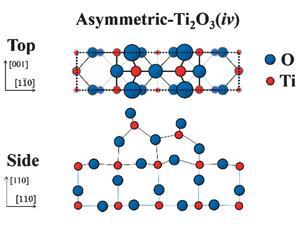 Scientists in Japan hope to settle a 30-year debate over the structure of a common form of TiO2 with results from a new spectroscopic tool.1

TiO2 is one of the most widely used photocatalysts and since structure dictates chemistry, better understanding titania’s structure could have important benefits. We know that rutile-TiO2’s structure transforms when annealed,2 but even after many theoretical and experimental studies the exact configuration of this form has never been confirmed. Toshio Hyodo, from the High Energy Accelerator Research Organization (KEK) in Japan, explains why this is the case: ‘Surface microscopies such as scanning tunneling microscopy and atomic force microscopy are sensitive to the atomic-scale morphology of the surface but find it difficult to discriminate between different atoms and to look into the subsurface.’ Traditional diffraction methods have not worked either: ‘Electron diffraction involving scattering from bulk atoms simply gives “background noise” for the surface structure analysis; x-rays penetrate deeper than electrons and thus the subtraction of the bulk components is always a severe headache,’ he says.

Positrons, however, are repelled by the positive nuclei in the bulk material, and changing the incident angle of the positron beam can selectively examine the surface or the immediate subsurface. This is why Hyodo and Izumi Mochizuki at KEK used the recently developed technique, total reflection high-energy positron diffraction (TREHPD), to connect surface morphology with bulk characteristics.

They compared the experimental data to many previous theoretical models and realised it most closely resembled one proposed in 20143 – an asymmetric-Ti2O3 structure with two titanium atoms located in the vertical interstitial spaces between the oxygen atoms. ‘This agreement of theory and experiment ends the debate,’ says Hyodo. Artem Oganov, director of the Center for Materials by Design at Stony Brook State University of New York, US, and one of the researchers who proposed the asymmetric-Ti2O3 structure, agrees: ‘This technique is able to discriminate between the different structural models, and to my delight, the new experimental data confirms one of our predicted reconstructions. This gives us stronger confidence in the other predicted reconstructions, and with this knowledge we are in a better position to understand the mechanisms of catalysis on this surface of rutile.’

Ulrike Diebold, head of the surface physics group at the Vienna University of Technology, Austria, is more cautious: ‘Structure and chemistry are intimately related and for one of the most important materials, TiO2, the exact structure of the annealed phase has been controversial for many years. This work very clearly rules out some of the models reported in the literature. While I am not sure that the last word is spoken, it is an important step towards resolving this important issue.’