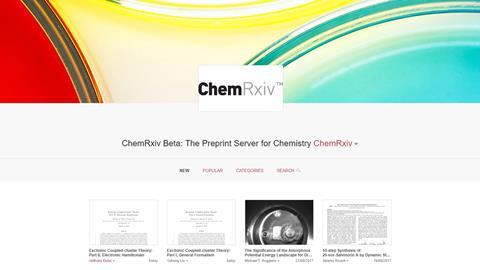 Chemists are finally getting a preprint server of their own, but the idea is still contentious

Chemical science publishing is in the midst of a seismic shift, something that was made clear at the 254th American Chemical Society National Meeting and Exposition in Washington DC during a panel discussion about the new chemistry preprint server ChemRxiv. Announced a year ago by the American Chemical Society (ACS) ChemRxiv recently went live in a beta version on 14 August and gives chemists a place to deposit their papers prior to peer review and publication in a journal. So far a total of six preprints have been posted to ChemRxiv.

Darla Henderson, the assistant director of open access at the ACS, emphasised at a panel discussion that the society was taking the lead in organising the chemistry preprint server, but with significant ‘strategic input’ from the Royal Society of Chemistry, the German Chemical Society and others. ‘We opened this to the community, and the community is going to help set the standards,’ she said. The next steps to move from beta to the final launch include establishing a scientific advisory board for ChemRxiv and finalising its governance structure.

The vast majority of the panellists and attendees, including editors of chemistry journals from various publishers, enthusiastically backed the chemistry preprint server. They argued that it will give authors the ability to post their research earlier and to establish a time and date stamp based on the information that they submit. Many stressed that this is especially important for young researchers who need to be able to point to their body of work in order to get a good job in the field, and can’t afford to wait up to a year after submission for their papers to be published.

Henderson and others also agreed that ChemRxiv can increase the rigour of chemistry. They said that preprints will let researchers obtain broader feedback on their work than they typically receive from two or three reviewers during peer review.

Over the past year, the ACS has engaged in discussions with its journal editors and editorial advisory boards about chemistry preprint servers. As a result, 80% of ACS journal editor-in-chiefs now allow papers to be published that have already been posted on a preprint server.

Laura Kiessling of the Massachusetts Institute of Technology and editor of the ACS journal Chemical Biology suggested that it would be beneficial for ACS journals to have a policy that is favourable toward preprint servers. ‘For chemistry to survive we need to support the young people, and it is really the young people that benefit from these policies,’ Kiessling said. ‘It is hard to fight against this direction in which publication is going, so find the best way to embrace it – that is probably our best way to move forward and stay at the forefront.’

However, Northwestern University’s Chad Mirkin, an associate editor of the Journal of the American Chemical Society (JACS), disagreed. ‘JACS has taken a different perspective, which is they are not going to publish papers that go through ChemRxiv, at least initially,’ he explained. ‘Their view is that they publish original work first, and once it is published in another venue – even preprint servers – it is no longer original.’

Among the concerns that JACS’ editors have with ChemRxiv is the possibility that it might dilute the quality of the chemistry literature, and that it could discourage scientific openness instead of promoting it. ‘Now, someone who feels like they have the same idea as you who hears you talk about it somewhere can quickly go write something up and put it out there on ChemRxiv, and now you have got an issue,’ Mirkin warned.

Alán Aspuru-Guzik from Harvard University said that the RSC’s journal Chemical Science, which he is an associate editor on, is ‘totally cool’ with research papers already published on preprint servers. He urged researchers to submit their papers to Chemical Science if other competing journals are less accepting.

Another contentious issue that arose during the ACS session is the fact that Dutch publishing giant Elsevier has just launched its own chemistry preprint server – Chemistry Research Network (ChemRN).

‘Of course we noticed that our colleagues at Elsevier launched ChemRN just a few days before our beta was ready,’ Henderson said. On day one, almost 700 preprints were posted to ChemRN, she said. However, none of those draft papers on the Elsevier platform appear to be new, according to Henderson. ‘They were older content, so your definitions of preprints might vary.’

University of Texas Southwestern Medical Center’s Sandra Schmid, who is a member of BioRxiv’s scientific advisory board, urged ACS members to boycott ChemRN. She advised them to use ChemRxiv or BioarXiv instead, since they are run by not-for-profits. ‘For the Elsevier service, you have to sign up, and get on their email list – they will monetise that some way, you can bet on it,’ warned Schmid. Elsevier respond that anyone can read and download papers from ChemRN without signing up, which is only required for submitting a paper or subscribing for alerts.