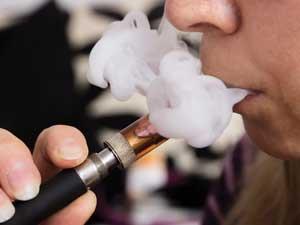 The vapour from electronic cigarettes includes not only the carcinogens formaldehyde and acrolein, but also probable carcinogens like propylene oxide and glycidol, according to new analysis by a group Lawrence Berkeley National Laboratory (LBNL) in the US. The researchers discovered that the thermal decomposition of two common solvents in e-liquids that are vaporised by e-cigarettes – propylene glycol and glycerine – leads to emissions of significant levels of 31 harmful chemical compounds.

There have been ongoing debates about whether cigarette smokers should be encouraged to switch to e-cigarettes amid a dearth of data about the short and long-term health effects of this relatively new technology.

This study also showed that factors like the temperature, type, and age of an e-cigarette affect emission levels. E-cigarettes were shown to release more toxins as voltage increases and with repeated use. In fact, increasing the voltage and heat in a single-coil vaporiser tripled the aldehyde emissions per puff and bumped up the acrolein levels by a factor of 10. For example, conventional tobacco cigarettes emit 400–650µg of acrolein per cigarette, and assuming 20 puffs on an e-cigarette equals smoking a conventional cigarette, the researchers estimated that total emissions of acrolein per e-cigarette are about 90–100µg. In the study, aldehyde emissions increased by more than 60% after the device was reused several times, which the researchers said was likely due to the buildup of polymerisation by-products that degraded upon heating.

The LBNL team suggested that their findings could help the efforts of manufacturers and regulators to minimise the negative health impacts of e-cigarettes.