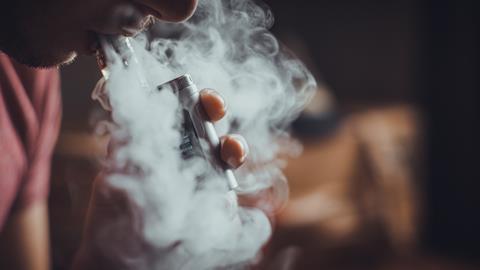 The researchers exposed healthy human bronchial epithelial cells to the two compounds over 24 hours, and linked this to gene expression changes even at low levels of these chemicals. Diacetyl has been linked for almost 20 years with the serious and irreversible respiratory disease bronchiolitis obliterans, dubbed ‘popcorn lung’ after workers at a microwave popcorn production plant in the US became sick from inhaling the chemical. Subsequently, 2,3-pentanedione was used as a replacement flavouring.

Study co-author Quan Lu explains that the mechanism by which diacetyl causes lung damage in animals and humans was unclear until now. ‘We identified about 140 genes whose expression are altered by one of these two compounds,’ Lu tells Chemistry World. ‘The number one pathway being perturbed by these compounds is cilia biogenesis,’ he adds. More than 20 genes in this pathway were suppressed when treated with the chemicals. The researchers observed fewer cilia on the surface of those cells.

Although 2,3 pentanedione is generally considered to be a safer substance than diacetyl, Lu says, this new analysis reveals that both chemicals induce the same kinds of problematic changes in human airway cells. The two compounds are by and large believed to be safe when eaten in food, but the scientific evidence indicates that they can be dangerous when inhaled.

Allen points out that e-cigarette users heat and inhale these flavouring chemicals, which have not undergone inhalation safety testing. He also notes that occupational exposure limits have been set for diacetyl and 2,3-pentanedione to protect US workers, but this regulatory apparatus has not translated to the broader community, including vapers. ‘Very few e-cigarette manufacturers, if any, even disclose which flavouring chemicals are inside their products,’ Allen states. He says that this needs to change.