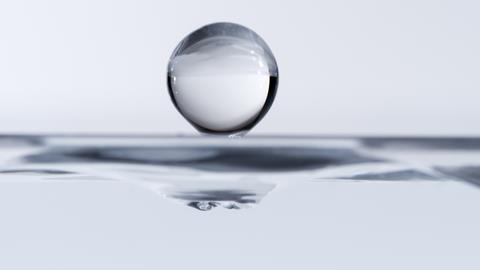 Ice crystals can only form in nanodroplets with at least 90 molecules, scientists have discovered. The tiny water clusters don’t freeze like bulk water, but rapidly oscillate between a crystalline, solid-like and disordered, liquid-like state around their freezing temperature.

Despite being a ubiquitous liquid, water keeps on surprising scientists. It has a plethora of solid and liquid forms, and shows unusual behaviour when confined to microdroplets – like spontaneously generating hydrogen peroxide.

Now, scientists have found that 90 is the minimum number of water molecules it takes to make the most common type of ice crystal, the hexagonal ice I. Nanodroplets with fewer molecules consist solely of amorphous, randomly oriented water molecules.

It also turns out that water clusters with fewer than 150 molecules lose their defined liquid–solid phase transition. Around their freezing point, they oscillate between a liquid and crystalline state every few hundred nanoseconds. This phenomenon was predicted from theoretical simulations 30 years ago but, until now, had never been observed experimentally.

To create the tiny water clusters, which are only around 2nm in diameter, the researchers funnelled a water–argon mixture through a 60μm diameter nozzle, rapidly cooling it as it expanded. Infrared spectroscopic signatures gave the team clues as to whether the droplets contained an intact hydrogen bonding network characteristic of ice I.

The discovery could have implications for the study of materials or proteins that often contain confined nanosized water droplets.