Scientists have employed magnets to separate enantiomers.1 Using the interactions between the electron spin in the molecules and the magnet, they initiate crystallisation of a specific enantiomer depending on which pole of the magnet is used. 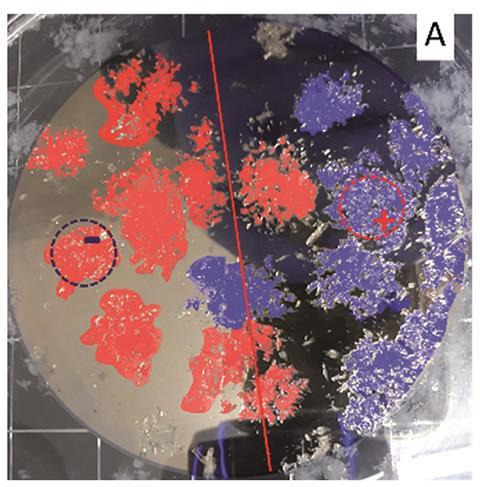 Magnetism and chirality were first linked in the mid-19th century by Louis Pasteur, who thought that homochirality in biology came from Earth’s magnetic field. We now know that magnetic fields are not chiral, however, building on their recent research bonding chiral molecules to magnets using an effect called chiral-induced spin selectivity (CISS),2 researchers led by Ron Naaman and Meir Lahav from the Weizmann Institute of Science, Israel, and Yossi Paltiel from the Hebrew University of Jerusalem, Israel, have started to use magnets to crystallise chiral compounds out of solution and fully separate them. ‘We sat together over coffee and said, “what about trying to look at crystallisation?” The truth is, I thought it would never work, but it did,’ says Naaman. 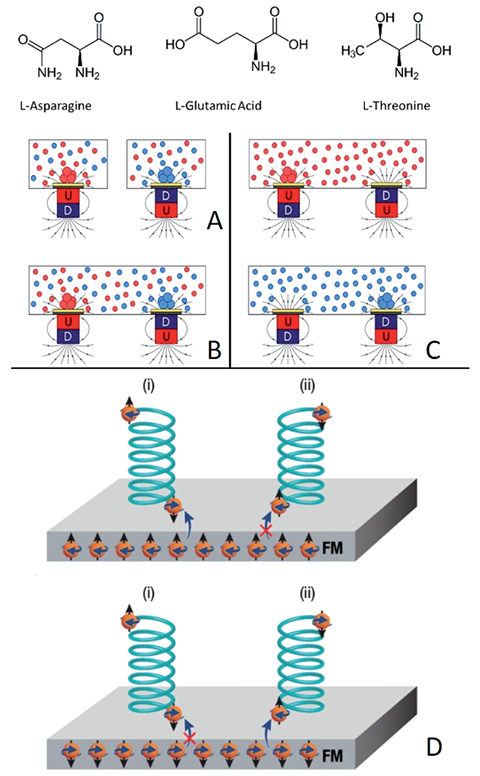 When a chiral molecule approaches the ferromagnetic surface charge polarisation occurs, accompanied by spin polarisation. The interactions are stronger when the spins of the ferromagnet are aligned antiparallel to the spin of the chiral molecule. Therefore, the enantiomer with the stronger interaction has a longer residence time at the magnetic site and a greater chance to crystallise

The researchers found that when a chiral molecule approaches the surface of a magnet, its electrons interact with those in the surface through a non-covalent interaction called spin–spin coupling. This interaction is more favourable when the spins in the molecule and surface are antiparallel, which occurs for each magnetic pole and a given enantiomer, due to the CISS effect. ‘Because of the attractive interaction with the surface for the [corresponding] enantiomer, you have a gradient of concentration that is higher for one enantiomer than the other. Then, the probability to start crystallisation is higher,’ explains Naaman.

Crystallisation is an autocatalytic effect — once it starts, it carries on — and although the tiny crystals diffuse away from the magnet, they continue to crystallise out of the solution. Using this effect, the team of scientists controllably crystallised enantiomers of different amino acids out of mixed and pure solutions.

‘The enantiospecific crystallisation reported here is another important confirmation of the CISS effect,’ explains Vladimiro Mujica, who studies quantum effects in chiral systems at Arizona State University, US. ‘It affects deeply the molecular response to magnetic substrates, due to exchange interactions.’

‘This achievement has only been possible after new discoveries that relate the interaction between magnetism and chiral molecules,’ comments Cristobal Viedma, who researches the crystallisation of chiral molecules at Complutense University of Madrid, Spain. ‘The current work could provide a new approach to utilise the enantioselective crystallisation method in a distinct and perhaps revolutionary approach.’

The method has to compete with crystallisation out of the bulk solution and can only be used to separate molecules that will form enantiopure crystals. However, constant stirring may eliminate bulk crystallisation and Naaman remains confident they can make their approach work for industry. ‘The idea is to have a scheme that gives 98% purity. That’s something that we’re working towards and it can be done — easily!’