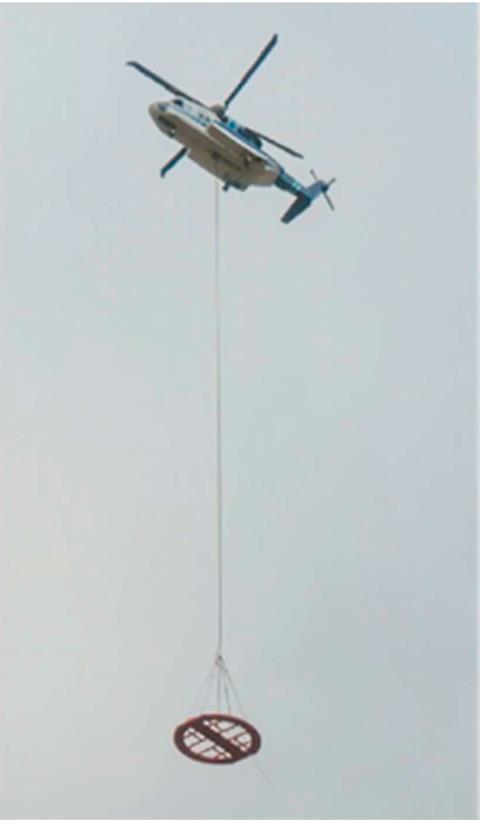 Exploiting the Earth’s magnetic field, researchers in the US and Canada have developed an innovative way to detect a grim prospective problem: pollution from increased shipping in the Arctic.

The team, including Albuquerque, US-based NMR innovators ABQMR and their Dallas-headquartered compatriot oil giant ExxonMobil, built a giant coil 6m in diameter that folds up into a transport container. Once unfolded, spill-seekers can suspend the coil from a helicopter, rest it gently on Arctic ice, then use it to send radio-frequency pulses and detect the resulting NMR signals. The scientists have shown that this coil can detect the equivalent of an 8mm-thick layer of oil in a few minutes, explains ABQMR scientist Eiichi Fukushima.

The research is needed because our current climate emergency includes shrinking summer Arctic ice, increasingly enabling oil tankers to pass through, risking spills and environmental damage. Spill-seekers have considered oil detectors including drone submarines or trained dogs. However these were ‘too invasive or too slow or, in the case of placing personnel on ice, presented too much danger to the personnel’, Fukushima explains.

NMR or MRI machines usually require powerful magnets to help align protons’ magnetic field orientation, more commonly known as spin, in substances being detected. These magnets are typically at least 40,000 times stronger than the Earth’s magnetic field, Fukushima explains. Without such magnets, NMR signals are around 10 million times weaker for each proton spin. Yet the sheer size of the coil the team uses compensates for those weak signals, enabling NMR without manufactured magnets.

Another challenge comes thanks to the many protons in the water molecules comprising the ice, which might block any signals from substances beyond. However, those frozen protons behave differently to protons in the liquid underneath, making it possible to distinguish oil. 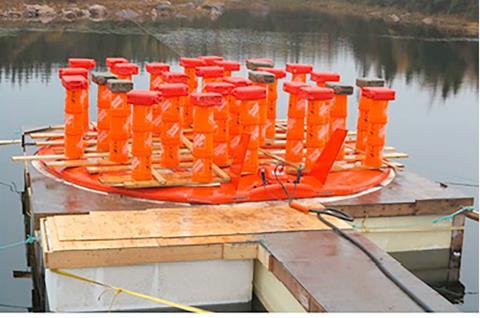 The team simulated an oil spill using jerry cans filled with canola oil, including by resting the cans on stacks of buckets above the NMR coil

The scientists demonstrated a full-scale flyable coil on a pond in Newfoundland–Labrador, Canada. A helicopter placed the coil on an 81cm-thick floating foam platform that served as a surrogate for Arctic sea ice. Rather than crude oil, they detected vegetable oil, which they kept in jerry cans. The team either put the cans at the water’s surface to simulate oil trapped under the ice, or on buckets above the surface, to simulate oil trapped in the ice.

An ExxonMobil spokesperson points out that it carried out its first successful tests of NMR to detect oil trapped in ice in 2016, and that the company patented the approach even before that.

Fukushima adds that Arctic oil leaks should pose fewer problems than elsewhere ‘because the uneven bottom surface of the ice will prevent the spread of leaked oil’. ‘The oil is thus confined, will move upwards through the ice with the seasonal variation of ice temperature and can be disposed of when it reaches the surface,’ he explains.

Mike Müller-Petke from the Leibniz Institute for Applied Geophysics in Hannover, Germany, calls the research ‘interesting and novel’, having previously seen early stages of the research at conferences. NMR is normally very sensitive to electromagnetic noise that a helicopter produces, but ABQMR, ExxonMobil and their collaborators overcame this by designing their sensor very specifically for Arctic ice. ‘It was hard to imagine that they could be successful, but they were,’ Müller-Petke says. He notes that the sensor could have a wider impact, for example in scanning soil properties, or looking for water in tunnels.