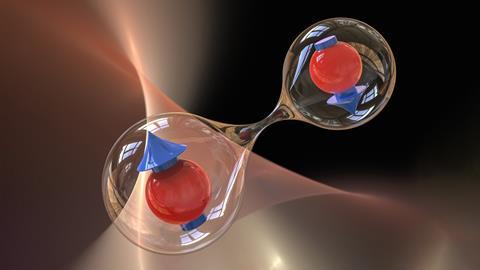 Untangling the spin-favouritism of chiral molecules

A new theoretical model explains why chiral molecules favour transporting electrons in one spin state over the other, providing a quantitative fit to experiments.1

Many current-carrying materials show no bias towards the spin state of the electrons they transport, allowing spin-up and spin-down species to flow in equal numbers. But chiral molecules can be more discriminating, offering easier passage to one spin orientation than to its counterpart.

The effect, called chirality-induced spin selectivity, or CISS, has been known for several years. Experiments from 2011, for example, show a marked degree of spin imbalance when current passes through a strand of DNA tethered to a gold electrode.2

Why does this happen? A good starting point might be the solenoid effect. Current spiralling through the helical structure of DNA generates a magnetic field along the molecular axis, much like in a coil of wire. This field interacts with the magnetic moments of the electrons, energetically favouring those spinning in a certain direction. It makes sense, but there’s a problem. ‘It’s orders of magnitude too small,’ says Yonatan Dubi, a theoretician at Ben-Gurion University of the Negev in Israel. ‘So the question is, what else can give rise to this?’

Dubi’s answer lies in the gold electrode and its interaction with the DNA helix. Recently he proposed the spinterface mechanism3 (a portmanteau of spin and interface), in which the solenoid effect seeds a wider symmetry-breaking of electron orbitals in the electrode. The resulting spin–orbit coupling drives a larger spin current, which in turn feeds back into even more pronounced orbital tilting.

‘The key mechanism here is you have the interaction between surface magnetisation and spin difference in the molecule,’ says Dubi.

As it stood, Dubi’s theory applied only to short molecules. Now he has extended it to cover longer strands of DNA, and matched it up with the experiments.2

Two challenges presented themselves, the first arising from the experiments themselves. Direct measurement of spin current is extremely tricky, so instead the experimentalists inferred it indirectly, by connecting a magnetised nickel electrode to the other end of the DNA molecule and measuring the charge current at two different magnetisations.

The second complication came from thermal vibrations in the molecule, which blur the electron wavefunctions away from their pure states. ‘You cannot use coherent quantum mechanics to describe DNA that is 40 base-pairs long,’ says Dubi.

A full theoretical treatment of this decoherence would be unworkably complex, but Dubi was able to pare down the problem to a phenomenological model based on a handful of parameters. A key breakthrough was to realise a relationship between the measured currents and the differential conductance of the molecule, allowing Dubi to match his theory to the experimental data in what he calls a ‘remarkable’ fit.

Quantum chemist Tom Fay, based at the University of California, Berkeley in the US, is also struck by the congruity. ‘Just plotting graphs of these two things, they look remarkably similar. That’s a very compelling bit of evidence for this mechanism.’

Fay holds a keen interest in spin-dependent processes and refers to CISS as ‘a fun little problem.’ But both he and Dubi see a more serious side too. Spintronics – an extension of electronics that exploits spin – is a fast-growing field, and molecules capable of filtering spins could prove very versatile in their uses. Dubi lists enantiomer separation, magnetising nanoparticles without using magnetic fields, and exotic devices called memristors as three potential applications for CISS, while Fay envisages that the effect could be used to prepare quantum states for quantum computation.