The rapid evolution of technology in recent years has produced everything from smaller, more powerful computers and sharper display screens to smarter mobile phones and more efficient electric motors. A key factor in these advances is new materials containing exotic elements such as niobium and tantalum, and rare earth metals including yttrium and dysprosium.

As consumers demand ever better products, the question of the sustainability of these critical elements arises: how urgent is the need to start developing substitute materials or alternative technologies? 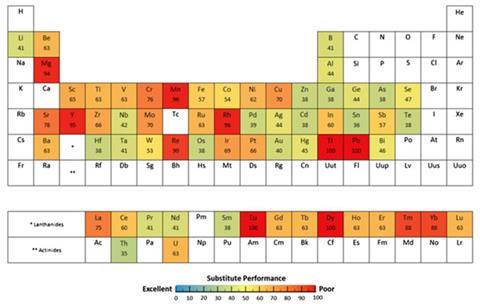 The issue has been thrown into sharp focus by a comprehensive new survey of the major uses of 62 metals and the performance of substitutes, where they exist. The audit, carried out by a team led by Thomas Graedel at Yale University in the US, arrives at a stark conclusion. ‘For a dozen different metals, the potential substitutes for their major uses are either inadequate or appear not to exist at all,’ the researchers say. ‘Further, for not one of the 62 metals are exemplary substitutes available for all major uses.’

But how likely is it that shortages of critical metals will arise in the future? ‘I do not think we are certain of how big a problem it is,’ Graedel says. ‘This is partly because we do not have as much information as we would like, but there are certainly a number of signs that things are getting more problematic than they have been in the past.’

But simple substitution of one material for another would seem to be tricky, says Graedel. ‘The most important thing we came up with in the survey is that the historic idea that if we do not have something available we can just substitute it for something else is very difficult given modern technology.’ A better approach, says Graedel, would be to seek to develop new technological approaches that produce the desired outcome but circumvent the need for scarce materials.

Andrew Bloodworth, an expert in metal resource management at the British Geological Survey, agrees. ‘We use these metals because they are the best materials available – a simple substitution will almost certainly lead to decreased performance. But functional substitution is different, where one type of technology substitutes for another, such as moving from an electric motor which uses a rare earth magnet to one that does not.’ This is the case in the search for substitutes for indium tin oxide in touchscreens, using alternatives based on carbon nanotubes or graphene.

Bloodworth does not believe that physical scarcity of ‘technology metals’ lies at the heart of the problem. ‘The Earth’s crust is big and we have barely scratched the surface. But nature has inconveniently distributed them and they are not evenly spread.’ The vast bulk of rare earth metals, for example, come from China, giving it a stranglehold on the market.

‘We need to find out more about how these materials form and concentrate in the Earth’s crust and we need to find ways of extracting and processing them and designing products that are more environmentally and energetically efficient,’ Bloodworth adds. ‘For example, we often put these materials together in thermodynamically incompatible groups, which makes them difficult or impossible to recycle.’

Efforts to develop substitute technologies that do not rely on rare metals are ongoing, and governments around the world are mobilising resources towards the problem. The US Department of Energy has sponsored 14 projects to the tune of $27 million (£16 million), many of which are examining new magnets that do not need rare earth metals. Ian Baker’s team at Dartmouth College, US, for instance, is investigating a new magnet based on manganese and aluminium. ‘Some years ago we made nanocrystalline powders of manganese and aluminium and showed that the material was magnetic,’ he says. ‘This project was to turn these powders into bulk materials, and in that we were relatively successful.’ While the materials made by his team cannot compete magnetically with their rare earth counterparts, on a cost analysis of production they could compare favourably with aluminium–nickel–cobalt magnets, which are widely used in a variety of applications such as electric motors, sensors and microphones.

Meanwhile, more evidence of a strategic approach to the issue of rare metals comes from the EU, which has launched a programme aimed at developing a strategy to reduce demand for critical raw materials. The CRM_InnoNet (Critical Raw Materials Innovation Network) aims to develop a ‘roadmap’ to identify approaches for substitution of 14 ‘critical raw materials’. ‘We are bringing together stakeholders from across Europe to look at how we can reduce our dependence on imports of these critical materials,’ says the project’s co-ordinator Claire Claessen.

And in the UK, the Engineering and Physical Sciences Research Council (EPSRC), has earmarked £10 million for a programme of research on ‘materials substitution for safety, security and sustainability’. EPSRC senior portfolio manager Richard Bailey says that the programme will focus on the manufacturing aspect of substitution technologies, with the aim of ensuring that appropriate supply and manufacturing processes will help innovative materials or technologies towards the market. Projects to be supported under the programme are due to be announced later this year.