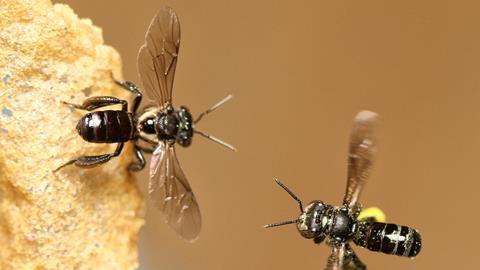 Australian researchers have discovered a new natural source of the rare disaccharide trehalulose – stingless bee’s honey. This unusual sugar is an isomer of sucrose and a major component – between 13% and 44% – of the sweet nectar of five species of stingless bees from Australia, Malaysia and Brazil.

While trehalulose is 70% as sweet as common sugar, it is considerably healthier. In this sucrose isomer, glucose and fructose are joined by an unusual glycosidic bond that enzymes in our small intestine break down three times more slowly. This results in a more gradual release of monosaccharides into our bloodstream, which could be beneficial for patients with diabetes. Moreover, the uncommon sugar–sugar linkage prevents bacteria in our mouth from digesting it, making trehalulose the ideal ingredient to sweeten our food without risking tooth decay.

Despite many claims about the health benefits of stingless bee’s honey, very few studies have examined its composition. When researchers used ultra-performance liquid chromatography (UPLC) to analyse the honeys, they found glucose, fructose and identified a peak that seemed to belong to a disaccharide – one that didn’t matched any of their references. That signal appeared in all the stingless bee honey samples, no matter their origin. Previous reports suggested this could be maltose, but neither UPLC nor mass spectrometry experiments matched maltose standards. The team then used preparative HPLC to isolate the mysterious ingredient and ran several NMR experiments to elucidate the spectra corresponding to trehalulose.

These results represent the first isolation of trehalulose from a natural food source. The researchers suggest their optimised UPLC methods could be used to authenticate the quality of this rare and expensive foodstuff.