Favourites of emperors and royalty, theriacs were the universal cures of their day 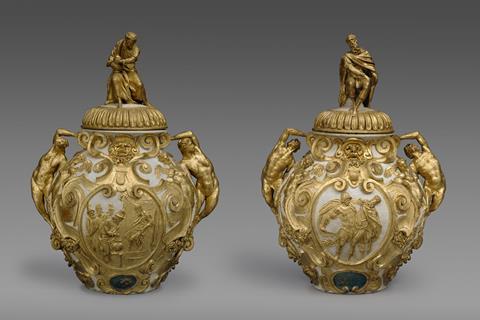 As ornate as the life-saving mixtures they contained: 16th-century jars for mithridatum (left) and theriac (right)

His fears were not irrational. His father was poisoned by his enemies and it has been said he had good reason to fear his mother would dispatch him in the same fashion. His name was Mithridates VI (c.132–63 BCE) and, like his father before him, he became King of Pontus, a state along the Black Sea. Mithridates’ fears spurred him to action – both as poisoner and poison scholar.

Mithridates has been called the first experimental toxicologist, with his primary goal being the creation of ‘a “universal antidote” to make himself and his friends immune to all poisons and toxins’.1 His experimental methods would now be considered dubious at best, including self-dosing with poisons and their supposed antidotes. His practice of taking a bit of poison regularly toward acquiring a tolerance bears his name – mithridatism.

Mithridates’ personal physician Crateuas, perhaps collaborating with his ruler, formulated a much sought-after universal antidote and dubbed it ‘Mithridatum’.2 With approximately 40 ingredients, it certainly aimed to protect Mithridates and his friends from ‘all poisons and toxins’. Like Mithridates’ practice of self-dosing with poisons and protectors, Mithridatum contained both toxins and their counterparts. It’s likely that the toxins present – probably insect and reptile venoms, arsenic, mercury and others – were in tiny, non-lethal amounts. Mithridatum’s ingredient list is thought to have included cinnamon, cassia, frankincense, myrrh, honey, garlic, musk, rue, tannin, Lemnian earth, wine, charcoal, ginger, rhubarb, St. John’s wort, saffron, walnuts, carrot, cardamom, anise, opium and more.

As discussed in the fascinating book Toxicology in Antiquity, chemicals in these ingredients have since been found to provide medicinal benefit or have a link to modern medicines. For instance, both cinnamon and cassia contain coumarin, a chemical compound found in a variety of plants that proved pivotal in the development of the anticoagulation medicine warfarin. Cinnamon also contains eugenol, an antibacterial agent and local anaesthetic long used in dentistry. The boswellic acids in frankincense resin have anti-inflammatory and anti-arthritic effects. Opium poppy sap contains morphine, an important compound in pain management – but one that requires great care-in-use given that it is addictive.

Mithridatum falls into a long line of universal antidotes known as theriacs. As its name suggests, coming from the Greek word theia (wild beasts), theriacs were thought to protect from toxins of certain animals. Later formulations expanded to (hopefully) guard against all manner of poison. We might be tempted to look back to ancient times with rose coloured glasses and see only delights, when the truer picture includes significant dangers. Theriac formulations span cultures and centuries because poisonings occurred fairly often in the ancient world. Poisonings in antiquity were not only murders, executions, assassinations and suicides – though there were plenty of those.3 Then, like now, there were a plethora of accidental poisonings. Having a theriac, which was ingested or used topically, can be thought of as having a well-stocked medicine cabinet in a single jar. And those jars could be quite pricey. A theraic’s container could be expensive and ornate – like the fabulously intricate gilded jar shown above. Then, like now, branding mattered and everyone seemed to have their favourite theriac.

The most celebrated theriac was one prepared for Roman Emperor Nero (37–68 CE) by imperial physician and botanist Andromachus. This theriac boasted 64 ingredients and Andromachus claimed it could treat all manner of ills – including plague. Nero probably did not have Mithridates’ toxicological knowledge, but Nero certainly used poisons – or ordered their use – to rid of himself of foes and family.4 Nero is implicated in the death of his stepbrother Britannicus, his rich aunt Domita, Burrus, the Prefect of the Praetorian Guard and others. Nero’s mother Agrippina the Younger is said to have survived her son’s attempts to poison her as she practised mithridatism. She did not, however, survive his other weapons of choice.

Cleopatra VII (69–30 BCE), embattled ruler of the Egyptian empire, ‘had a deep understanding of poisons’ and might have used a theriac.5 But if she did, it did not protect her. Cleopatra was lethally poisoned – and it might not have been the self-envenomation with an asp that we grew up reading about and seeing on screen. Some scholars have argued that the details of Cleopatra’s demise are more aligned with an assassination-by-poisoning on the orders of Octavian, Julius Caesar’s adopted son and future emperor of the Roman Empire.

Whether suicide or murder, the possible failure of Cleopatra’s theriac highlights what has been known of these medicinal concoctions since their inception. Each theriac has its limits. Each theriac hoped to improve on the last. While it is now known no true medicinal panacea exists, history is replete with humankind’s attempts to find one. From the rulers of societies to society’s most vulnerable, people craved safety and wellness. We still do.

1 A Mayor, Mithridates of Pontus and His Universal Antidote. In P Wexler (Ed.), Toxicology In Antiquity, p161. London: Academic Press, 2019