Researchers in Australia have studied how dichloroiodobenzene (PhICl2) interacts with pyridine ligands and their findings contradict the previously proposed mechanism for the chlorination reaction with these reagents.

PhICl2, a common reagent for chlorinating a wide range of substrates, is often used together with pyridine as an additive to increase its reactivity. Among the examples are chlorination of diazo compounds or hydrazones, electrophilic aromatic substitutions and oxidation of alcohols. Although pyridine has an activating role in the chlorination reaction, it is unclear how it works. Classic organic chemistry textbooks describe the pyridine activating PhICl2 by displacing one of the chlorides forming a cation ([PhI(Pyr)(Cl)]+), which in turn delivers the chlorine to the substrate. But now, Jason Dutton at La Trobe University, together with collaborators at the University of Queensland, have discovered that this is not the case. When crystallising PhICl2 in pyridine, single crystal x-ray analysis showed that instead of displacing a chloride, pyridine forms a square planar complex via a halogen bonding interaction with PhICl2. 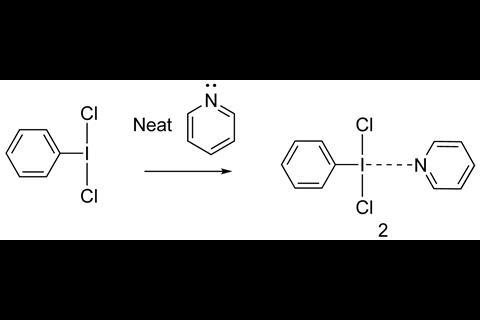 Pyridine does not displace chloride, but rather forms a weak complex with the iodine via halogen bonding along the C–I bond axis 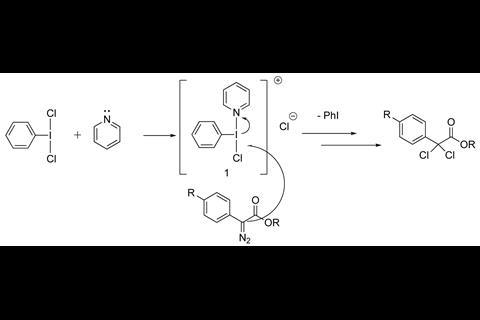 In general, hypervalent iodine compounds are widely used in organic synthesis and with their structure and reactivity being similar to transition metal derivatives, they are considered versatile and environmentally friendly reagents. Learning more about how they work help chemists develop more efficient synthetic procedures.