An international team of researchers has combined remote operation of flow chemistry apparatus with an autonomous reaction optimisation algorithm to improve syntheses of three pharmaceutical compounds. After being programmed from the US, a server based in Japan controlled machinery in the UK to quickly arrive at optimal synthesis conditions. 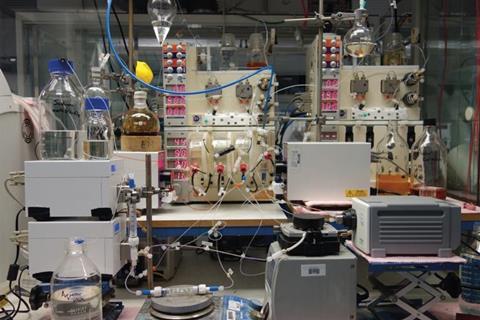 Once the basic setup is established and reagents added, the system can be remotely programmed with optimisation parameters from the US (or anywhere else), and controlled by an algorithm running on servers in Japan

Organic chemist Steve Ley and colleagues at the University of Cambridge connected their flow synthesis apparatus to the internet. ‘Each piece of equipment within the lab has its own IP address,’ explains chemical engineer Daniel Fitzpatrick, meaning they can be individually controlled from the servers in Tokyo.

The team first looked at the final step in a route to the painkiller tramadol – a Grignard addition to a ketone. They set up a flow reactor with two supply lines for the reagents, temperature control and monitoring equipment and valves to control the residence time of the chemicals inside the apparatus. Using a simple online interface, biochemist Amanda Evans at California State University in Fullerton programmed the apparatus to search temperatures between 30°C and 70°C, residence times between 5 and 20 minutes and a range of reactant ratios.

The setup includes an infrared spectrometer, to continuously monitor the ratio of product and reactants in the output stream and thereby to provide feedback on the conversion. This information was fed in to the optimisation algorithm and used to modify the conditions. Within three hours, the algorithm determined that optimum yield (86%) was achieved at 41°C, with a residence time of 10.9 minutes and 1.6 molecules of Grignard reagent per ketone molecule. The volumetric yield was significantly improved over comparable flow process optimised by another academic group.

The researchers used their cloud-based process to develop syntheses of two further pharmaceuticals: the local anaesthetic lidocaine and the antidepressant bupropion, in each case surpassing previously-reported results. The process could be used to produce a wide range of chemicals beyond pharmaceuticals, and the researchers hope such techniques will facilitate virtual sharing of expensive chemical equipment between laboratories: ‘This is the precursor of what we’re thinking about in the years to come, where a lot more of this remote control and interaction between collaborating groups will take place,’ explains Ley.

Organic synthesis expert Frank Gupton of Virginia Commonwealth University in the US believes the research could reduce the waste generated by the pharmaceutical industry in multi-step drug syntheses: ‘What Steve and I have been working on separately is how to get high-yielding reactions that will prevent us from having to do intermediate purifications,’ he says. ‘I think that Steve’s cloud-based machine learning process is going to open a lot of eyes in the pharmaceutical industry about how to do that efficiently without having a longer lead time in drug development.’