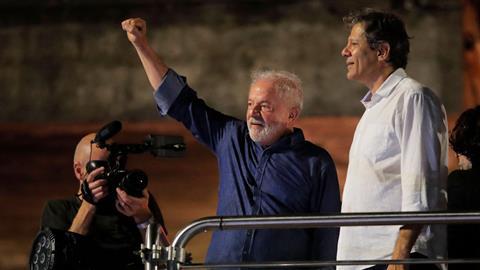 Scientists, researchers and academics across Brazil are celebrating the victory of former president Luiz Inácio Lula da Silva over incumbent Jair Bolsonaro. Leading up to the runoff election on 30 October, there was strong support for Lula from the country’s research community.

Lula beat Bolsonaro with 50.9% of the vote to 49.1%. The exceptionally close result and the fact that Bolsonaro has not yet conceded has led some to fear that he and his supporters may still contest the result.

Lula’s victory represents not just a change of government, but the country’s ‘return to normality’ and ‘the exchange of a president who denied science and destroyed education for another who sees science and education as fundamental pillars for development’, says Aldo Zarbin, a materials chemistry professor at the Federal University of Paraná and former president of the Brazilian Chemical Society. ‘It’s a change from water to wine.’

Liane Rossi, head of a nanomaterials and catalysis lab at the University of São Paulo, agrees. ‘So happy and relieved,’ she tells Chemistry World. ‘The election of Lula means hope that we will have a policy of protection of science and the environment,’ Rossi continues. Under Bolsonaro, for example, there has been a dramatic increase in deforestation of the Amazon, as well as repeated threats to pull out of the Paris agreement.

In contrast, Rossi points to Lula’s explicit support for science, technology and innovation, and his pledge to reform the country’s investment in science through increased funding for government agencies. She notes that the new president is also committed to social, environmental and economic sustainability, including tackling climate change.

Further, Lula has also made clear that he wants to protect academic freedom. Lula’s initial commitments include the guarantee that he will open communications with the scientific community, provide resources for universities and increase scholarships for graduate students, Zarbin recounts.

The government’s investment in federal universities has plummeted over the last two decades, and support fell even further once Bolsonaro took office four years ago. Major agencies within the country’s science ministry have been crippled by these cuts.

‘We can expect more investment in science and technology and incentives for start-ups, which can be a huge and precious opportunity for Brazilian young scientific talents,’ says Antônio Miller Crotti, an organic chemist at the University of São Paulo.

Many academics have praised Lula for his support for science between 2003 and 2011, says Fernando Galembeck, a physical chemistry professor at the University of Campinas in São Paulo. Nevertheless, Lula was caught up in corruption scandals and was sentenced to prison in 2018 though released early after Brazil’s supreme court ruled that he and many others were improperly imprisoned before their appeal options had been exhausted.

Galembeck recalls that most universities in the country ‘persisted in doing more of the same’ under Lula’s administration, and a few new universities were better adapted to survive and even flourish. But in the last few years under Bolsonaro, Galembeck says the lack of support for scientists and universities was ‘remarkable’.

He says that Brazilian science is still alive because researchers are not solely dependent on federal research funds. Instead, many states have maintained and even increased their research and higher education budgets.

During Lula’s previous tenure as president he benefitted from low inflation and cheap oil, helping Brazil to pay off some of its debts, according to Galembeck. But now, he will face a huge deficit left by Bolsonaro.

‘Lula will not have plenty of money to spread around, he will have to make sound choices,’ Galembeck says. Moreover, his left-wing Workers Party didn’t fare well during the election, while Bolsonaro’s conservative PL party performed better and had many of its representatives and senators elected, he notes. For example, Marcos Pontes, Bolsonaro´s former science minister, was elected to the Senate to represent São Paulo.

Lula’s re-election means ‘there is now an opportunity to reconstruct the system of education, science and technology in Brazil, which together with culture was severely penalised by Bolsonaro’s government’, states Luiz Davidovich, an emeritus physics professor at the Federal University of Rio de Janeiro and a former president of the Brazilian Academy of Science. Davidovich acknowledges that Lula will need the support of a potentially unfriendly Congress, but says he is a skilled negotiator who has forged broad alliances in the past.

Mercedes Bustamante, an ecologist at the University of Brasilia, concurs that most scientists are ‘relieved and hopeful’ about the change in leadership, but she warns that Lula faces an ‘enormous’ challenge because Brazil’s science policies will need to be reconstructed, and space will have to be made in the 2023 budget to support universities and researchers.

‘The main obstacles will be the legacies of four years of erratic scientific policies and the new political configuration of the congress,’ Bustamante predicts.